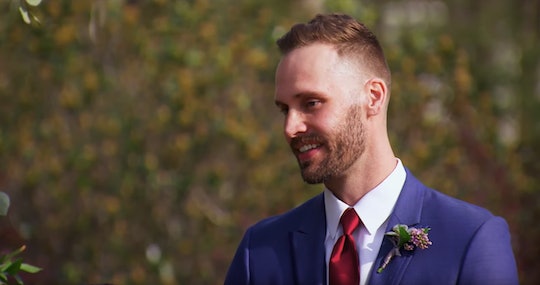 With the Season 9 premiere of Married At First Sight, viewers were introduced to four new couples ready to take a chance on love. One couple in particular, Matthew Gwynne and Amber Bowles, look like they might be a perfect match, and fans want are dying to know more about them. Amber doesn’t have much of an online presence, so fans are wondering what Matt from Married At First Sight’s Instagram looks like.

Unfortunately, it seems like Matt’s Instagram — under the user handle @mkgwynne — is set to private, so no luck there. But there’s a lot you can find out about him through his Lifetime cast profile. According to his bio, he’s an athlete who’s looking for a partner with similar interests. “Matthew, 31, is an international basketball player who has been single for more than a year and is looking for someone who can adapt to his schedule,” the network bio reads. “He has a strained relationship with his recently divorced parents, and wants a relationship where his partner is as devoted to athleticism as she is to him.”

But it looks like Matt may have put his basketball career on hold, at least for now. On his Linkedin page, he’s currently listed as a Regional Operator for a car detailing company called Fleet Butler, where he has been working since March. Before that, he worked as a Video Sales and Production Coordinator for a sports event company. The last time he worked as a professional basketball player was in 2018.

According to his ESPN profile page, Matt played basketball for the University of Tennessee Chattanooga from 2006 to 2008, and he then went on to become the forward/center for Campbell University’s Flying Camels. In 2012, Matt started his international basketball career by joining the USA Select International Tour, an organization "formed to assist American basketball players find professional opportunities internationally," according to its website. He went on to play for the British Basketball League from 2012 to 2013, and then started playing for Mexico's professional basketball league, the Liga Nacional de Baloncesto Profesional (LNBP), in 2016.

Ahead of the Married At First Sight premiere, Matt talked to People and revealed that his international basketball career didn’t give him time to find love, which is why he ended up going this unconventional route. “I’m getting married at first sight because I like to take risks,” he told the outlet. “No risk, no reward. I’m single. I’ve been a hopeless romantic my whole life, so why not?”

On the show, Matt’s been matched up with Amber, a middle school teacher who’s cast bio describes her as a “bubbly” and “energetic” family-oriented person who loves to travel. When talking to People, she admitted how ready she is to finally find love and settle down. “I don’t want to date anymore,” she said. “I’m so ready to start my forever.”

Matt and Amber are keeping their personal lives out of the public eye for now, so fans will just have to watch through this season of Married At First Sight to learn more about them and see how they fared post-wedding.