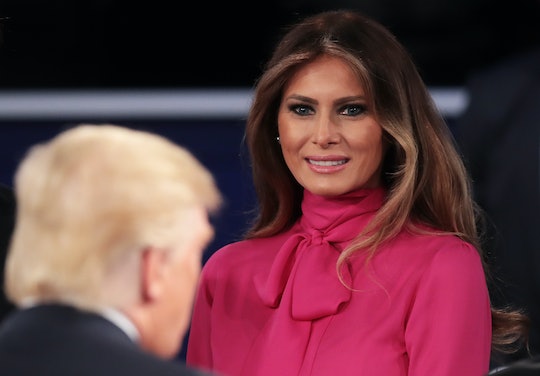 What Is Melania Trump's Net Worth? She Has Worked As A Model Since The Age Of 16

Politics and plagiarism aside, Melania Trump is an objectively impressive person. Born in Sevinca, Slovenia, Melania became a citizen in 2006 and now, just 10 years later, is weeks away from finding out whether she will become the next First Lady of the United States. Trump has also had a career as a model, in commercials and more. So what is Melania Trump's net worth?

Melania Trump has remained mostly quiet throughout the tumultuous campaign, except for her now infamous Republican National Convention speech proven to have a section copied and pasted from a Michelle Obama speech from 2008, according to Vice News. But what many people don't know is that the statuesque beauty speaks five languages: Slovenian, English, French, Serbian, and German, according to CBS News. Trump began working as a model at just 16 years old, she took a break to attend college, and that's where her bio becomes a bit complicated.

The Republican National Convention programs listed her accomplishments and biography, which was identical to what was posted on her website, according to CBS News. It read:

After obtaining a degree in design and architecture at University in Slovenia, Melania was jetting between photo shoots in Paris and Milan, finally settling in New York in 1996.

The only problem with that claim is that CBS News found Melania is not listed in the school records as having received a degree. Trump previously told GQ Magazine, according to CBS News, that she left school after a year to go to Milan, Italy, to model.

There aren't many details about how much Melania has earned over her career, but one site, NetWorth, estimates she's worth about $11 million. But this number's credibility seems questionable, since the same article also includes the claim that Melania has a college degree and this effusive quote: "With her proportional measurements and beautiful face, it is easy to see why she chose to pursue a field that places high importance on her looks."

Whatever Melania has in the bank, she might want to hold onto since, Donald Trump bragged to gossip columnist Liz Smith that she signed a prenuptial agreement before their 2005 wedding. "And the beautiful thing is that she agrees with it," Trump said to Smith according to CBS News.

But regardless, Melania is a private person who seems unwilling to share those details about her personal life. And considering her husband isn't interested in opening up his finances during the run for President of the United States, the odds of his wife deciding to share have to be nil.