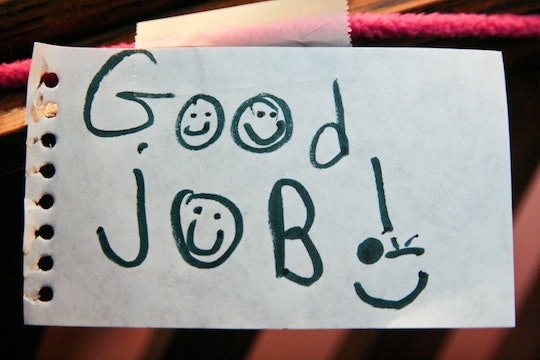 What Is Metric Parenting? It's Great In Theory, But It Might Be Missing One Crucial Thing

Worrying over whether you’re doing enough of the right things is probably something most parents struggle with. In the rush of the daily calendar, many parents fret over whether the kids got enough attention, whether they spent enough time explaining rather than yelling, and whether the family had more happy moments than sad. According to journalist and author Reva Seth, the secret to better parenting might be in the data-driven approach to performance measurement some of us use at our 9-to-5 jobs. What exactly is “metric parenting?” For those of us who get excited about setting clear goals and figuring out how to achieve them, it could be a helpful approach to parenting: treat it just like you would any other job — with goals, a strategy, and a vision for success.

Balancing job and family is a real issue for working parents, and more than six in 10 mothers feel like they’re having trouble doing it, according to the Pew Research Center. But some mothers reported an easier time of it than others. In researching her latest book, The MomShift: Women Share Their Stories of Career Success After Having Children, Seth interviewed more than 500 parents on how they managed to balance the demands of working outside and inside the home. And, in an article for Fast Company, Seth described an interesting pattern among many of the parents she interviewed:

Without always realizing it, the working parents I spoke to were deliberately setting goals like ‘being more present’ or ‘cultivating my child’s curiosity’ and turning them into tangible objectives they could work toward achieving.

It might sound completely unconventional (if not a bit cold), but Seth may actually be onto something here. For those of us used to excelling in the office environment, the principles of metric parenting might feel like the solution for tackling the demands of parenting life. In her post, Seth wrote that the parents who reported the most “success” in balancing their parenting responsibilities “regularly scheduled time to review their progress, and many of the parents with two or more children even had some way or another of tracking their engagement with each child.” The outcome was that Seth’s metric parenters felt more present in their children’s lives and closer to their own vision of parenting success.

According to Seth, metric parenters start by setting a clear definition for personal success. Just like they might do at work or in business, Seth said that parents should write down whatever it is they want to do more or less of, then clarify the steps they might take to get there. For example, even though I work from home, my busy schedule of clients and freelance writing gigs sometimes means that I’m not able to volunteer at my daughter’s school as much as I’d like. Seth might suggest that I write a goal for how many school activities I would feel comfortable adding to my plate, putting them on my calendar, and shaping my daily workload in order to accommodate. (By the way, just writing that sentence made the prospect feel far more doable.) Then, every few months, I might do a personal check in to see if I actually kept those appointments — and if not, what I can change in order to meet the mark next time.

The goal-setting doesn’t have to be elaborate, or even particularly formal, Seth wrote:

It isn't about recording all your frenetic parenting activity. It's about capturing moments, so you can have more of the ones that matter—for instance, when you listened really patiently or had a genuine emotional connection with your child.

But Here's Where Metric Parenting Might Break Down — Fast

Taking a data-driven approach to parenting may not work for all moms and dads — or their kids, for that matter. Seth’s approach might be too focused on what the parent wants to see rather than what the child actually needs. That’s an issue with metric parenting that Slate blogger Elissa Strauss explored in her recent rebuttal article: “Children are fluid, ever-shifting creatures; their needs change rapidly and forcefully, and what makes you a good parent one day won’t necessarily be helpful the next.” Kids are in near-constant motion (mentally, if not physically) and their parents’ definition of success has to be just as adaptable.

In real terms, I can spend hours writing about what an ideal mom to my 5-year-old daughter looks like, but she’d probably rather I spend that time coloring with her, playing hopscotch, or just letting her unwind with her favorite cartoon without worrying over how much time she’s spent with Peppa Pig lately. Limiting screen time sounds like a great idea, but what if my child is using that screen to make new friends at school or learn more about something they learned in class that day? The point is, I can make pretty plans for what successful motherhood should look like, but my child has her own ideas — and they’re evolving just as quickly as she is.

We all want to nail this parenting thing. But the beauty of parenting is that the definition of “nailing it” is as varying and fluid as the kids we get to raise. Taking a more deliberate approach to parenthood sounds good in principle, but perhaps, instead of fretting over whether our success as moms and dads is backed up by data, it might be more beneficial to commit to being more present with our kids — whatever that vision looks like to them.