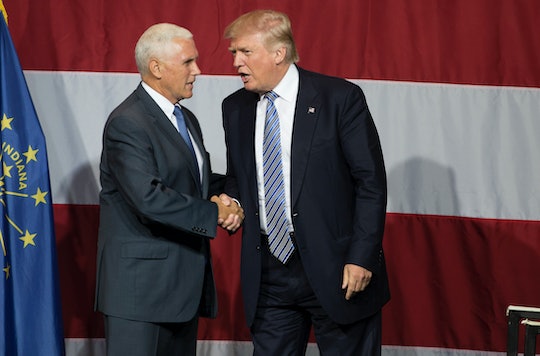 According to Roll Call, presumptive Republican nominee Donald Trump has selected Indiana Governor Mike Pence as his running mate. While this is only an initial report that has yet to be confirmed by the Trump can, many are left wondering, "What is Mike Pence's record on women's rights?" should Pence become the vice president of the United States.

Sadly, Pence's record is not a pro-choice one. In fact, Pence has been labeled as an "Evangelical pro-life champion," and has signed multiple anti-choice pieces of legislation into law. He has even been credited with leading the fight that ended with Congress de-funding Planned Parenthood. Senior communications advisor Jason Miller said on Twitter, “A decision has not been made by Mr. Trump. He will be making a decision in the future and will be announcing his Vice Presidential pick tomorrow at 11 am as planned." So, while Pence has not officially been named Trump's running mate, pro-choice advocates are anything but thrilled at the potential vice president pick.

In March of this year. Pence signed a law imposing new limitations on abortions in Indiana. The law banned abortions motivated by fetal abnormalities, fetal genetic defects as well as other fetal characteristics, further restricting women (and all parents, in general) from deciding what is best for themselves, their bodies and their families. Pence described the law as, "a comprehensive pro-life measure that affirms the value of all human life." Pence continued, stating, "I believe that a society can be judged by how it deals with its most vulnerable — the aged, the infirm, the disabled and the unborn." Proponents of the law disagree with Pence, saying the law would potentially force women to endure complicated, high-risk pregnancies and could discourage women from being open with their doctors. Apparently Pence doesn't consider women with high risk pregnancies to be vulnerable.

Pence's decisions to sign a clear anti-choice piece of legislation into law troubled numerous women across the country and particular living in the state of Indiana. Women starting "trolling" Pence, calling his office to share what the republican governor considered "TMI," which ended up being detailed descriptions of their menstrual cycles.

It's safe to say that Donald Trump's reported running mate will do nothing to aid the continued fight for women's rights and the ability for women to access safe, legal and affordable abortions.