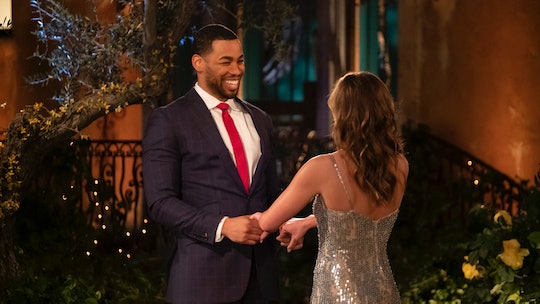 If Happiness Were A Real Job, This 'Bachelorette' Contestant Would Have It Made

Hannah's all in on this "find love" thing which means Season 15 of The Bachelorette is fully underway. One stand out Texan gave a memorable, yet genuine, first impression minus any gimmicks — Mike Johnson. Though it's clear this dude loves his mom and great grandma, what is Mike's job from The Bachelorette? You need to paint the whole picture before deciding if he's a good match for Hannah or not.

According to Mike's ABC bio, he's a portfolio manager in San Antonio and also an Air Force veteran who dabbles in Krav Maga. Having already traveled to 30 countries, he might spend his free time sightseeing or, also on the bio, going to "trampoline parks." If Mike spends his days as a portfolio manager, it means he's probably pretty good with money — a definite plus for anyone's potential life partner. There is also the fact that he's a major grandma's boy who refers to himself as "city boy who loves to get down and dirty," which could mean long-term relationship status for Alabama Hannah and Mike — as long as she doesn't take him skydiving (a major fear of his and I don't blame him).

If you've tried creeping on his social media pages to get more info, he was a pretty private guy until the premiere. Aside from the single YouTube video of reuniting with his mom (yes, it's as sweet as it sounds), there still isn't a long history of social media use. His Instagram bio (which has only just become available to the public!), says he's the Creator of Amor Sui, but I'm not sure what that is. His Linkedin page just says "Happy at Life," and if that's a job, I want in. Career aspects aside, Mike also has a compassionate heart as shown through his volunteer experience. He's been a Big Brother at Big Brothers Big Sisters of America, an Organizer at Children's Aid Society, and spread Breast Cancer Awareness during his time in the service.

Based on initial impressions, Mike may have a good chance at becoming Mr. Hannah. His easygoing personality and her awkward, bubbly self could create the most perfect couple in Bachelor Nation history. After everything that went down with Colton last season, Hannah may have her guard up — and who could blame her? She overcame the beef with fellow contestant, Caelynn, and appeared to soar towards the finish line. Now that the former Miss Alabama USA is in the driver's seat, I'd say Mike is a frontrunner to keep your eye on.

With so much drama on the premiere, it's hard to say how this season will go. Hannah already sent one dude home who confessed (kind of) to having a girlfriend on the back burner. I don't think Mike is going to be that guy, and hopefully Hannah will find out sooner rather than later. Marie Claire reported that if Hannah is looking for a man who can be loving and goofy, Mike is it.

Being a financial portfolio adviser may be Mike Johnsons's "job," but with this level of charisma, I foresee a transition into something bigger. For now, he's Hannah's potential life mate, and TBH, I'm pretty darn excited to see more of him.