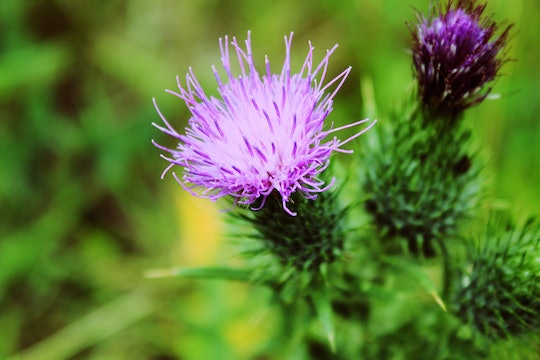 Magical Milk Thistle — How It Helps Your Supply

Whether you dub yourself a "crunchy mom" or not, natural remedies to treat everyday ailments has become more and more prevalent. From treating common colds, to preventing health problems down the road, many claim that nature provides us with more than enough to keep us happy and healthy. The milk thistle is one such plant that experts and crunchy mamas alike swear by. But exactly what is a milk thistle and what do people claim it can do? It actually has a lot more benefits than you probably guessed.

The plant, which is traditionally native to the Mediterranean, is a member of the same family as daisies and sunflowers, but it isn't known for it's pretty appearance or fragrant smell — according to the National Cancer Institute, it's known for much more than that. It gets its name from the milky white sap that it's leaves secrete when crushed. Although many parts of the world simply consider the plant to be a weed, it has lots of health benefits that are worth taking into consideration.

According to the Mayo Clinic, milk thistle has been used to treat a variety of ailments for more than 2,000 years. It's thought to be an herbal remedy for liver, kidney, and gall bladder healthy, in particular. The University of Maryland's health center noted that he "active ingredient" that makes the plant so potent is called Silymarin, a flavonoid thought to repair liver damage from alcohol and prevent further cell damage.

The benefits don't stop there either. According to Dr. Mercola's website, silymarin is anti-fibrotic, meaning it prevents tissue scarring, and prevents toxins from binding to the liver's cell membrane. It also reduces inflammation, helps prevent gallstones, boosts the health of your skin, protects against carcinogens, and has anti-aging benefits, according to Dr. Axe, one of the leading resources for holistic health.

The most common ways to take the herb supplementally is with capsules containing the dried leaves, or in a liquid concentrate, or even in tea form. Experts recommend getting the purest milk thistle you can find — around 50-150 milligrams pure milk thistle, and taking it as a daily supplement or using it temporarily to detox your liver.

As always, before beginning a new health regiment, it's best to check with your health care provider.