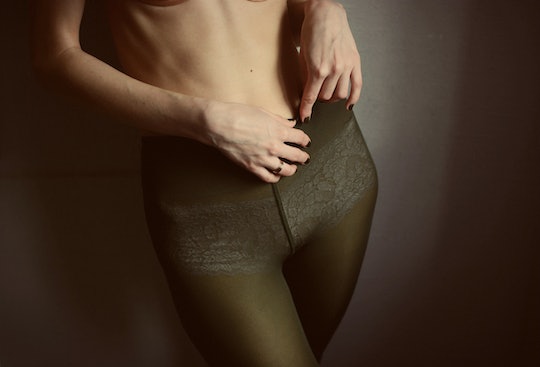 How Should You Smell Down There? Not Like Roses

At one time or another, nearly all women question if they smell down there. Chances are, you do. That's not to say that your lady bits smell all the time. If you just took a shower and adequately cleansed yourself, you probably don't. But vaginas do have a scent. It's normal, and it's not pleasant. I mean, vaginas aren't meant to smell like a flower garden. That being said, some scents may be more problematic than others. Which is why it's important to ask yourself "what is my vagina supposed to smell like?"

According to gynecologist Dr. Lissa Ranki, any sort of vaginal scent tends to fill women will feelings of embarrassment and annoyance, which, honestly, makes sense. How do you feel when you take off your shoes and your feet stink? Or after a hot yoga class? Feeling smelly, even if it's less extreme than those examples, can make you feel like people are judging you, thinking that you're unhygienic.

Although that's understandable, Rankin also wrote that when people ask if being a gynecologist is a smelly profession, she often catches misogynistic undertones to the conversation. It's as if men are supposed to be smelly, while women are supposed to be feminine and freshly-scented at all times. But because women are also human beings, they smell too from time to time.

So what does "normal" smell like? As with many things, it varies woman to woman. As one 1975 study found, there could be nearly 2,100 distinctive odors associated with vaginas. Not only is there no one "normal", but the scent can change at different times in the menstrual cycle or after sex, according to a YouTube video with Dr. Sara Gottfried. In addition to sex and hormonal changes, Web MD noted that vaginal scent could change due to certain medications or supplements you're taking, particularly odorous foods you've recently eaten, or fitness or other sweating . Any sort of scent down there is as variable as any sort of scent anywhere else on your body.

It's also possible that your vagina won't really noticeably smell at all from time to time. Dr. Ronald D. Blatt, chief surgeon and medical director at the Manhattan Center for Vaginal Surgery, told Your Tango that "healthy" vaginas don't smell, but there usually is a scent of some sort.

Luckily, vaginas are designed to clean and regulate themselves for the most part, according to YourTango. But that also means that they can be sensitive to overly perfumed products. WebMD suggested upping your water intake if you're worried about how you smell or feel like you smell more than normal. Gottfried also noted that you should stick to cotton panties rather than opting for underwear made from synthetic fabrics can help too - cotton is more breathable. Ultimately, a slight scent is normal and nothing to worry about or be ashamed of.Broadly noted, however, that fishy, garbage-y, or other overpoweringly awful smells are not normal. If you notice those, talk to your doctor.