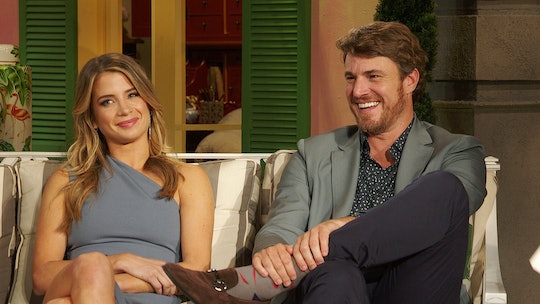 Naomie Olindo introduced her new boyfriend Metul Shah in Season 6 of Southern Charm, and it seems like she couldn't be happier. He's a little different from her co-stars in that he's not a reality TV star or a Southern socialite. In fact, he's just a normal guy with a completely normal career that doesn't involve being interviewed by Andy Cohen at all (though maybe it should). So what is Naomie's boyfriend's job on Southern Charm?

According to People, Metul is an anesthesiologist. He moved to Charleston in 2017 to start his residency and he's been working towards that goal ever since. Previously, he attended medical school at Virginia Commonwealth University. His strong work ethic is something that Naomie appreciates about him, which she took time to point out during the Season 6 premiere. She said he would never stay out late or even drink the night before he had to work, because "people's lives are at stake." While talking to Entertainment Tonight, she described Metul as "so normal, so stable and nice," as well as "very, very supportive."

Being a physician means Metul's everyday life is a world removed from the Bravo cameras. Appearing on the show wasn't necessarily something he was interested in at first, so he and Naomie had to figure out a situation that worked for both of them.

Naomie told ET that Metul was "the one" for her because they did manage to make it through filming together after all. Letting the public in on their relationship was scary and left them open to criticism from the world at large. And it was especially tough because Metul is not a reality TV enthusiast. Naomie explained that it was "really not his thing," adding, "He doesn't even watch reality TV!" (Side note: how?)

But she went on to say that they had a game plan in place to deal with any negative fallout. They were prepared for any comments or critiques that might come their way. It seems like they were ready to navigate the situation as a team, which makes it sound like their relationship is on the right track. But despite the fact that Naomie and Metul appear to be in it for the long haul, she's not looking to rush their relationship to the next level.

In her interview with ET, Naomie said that she didn't think they would be getting engaged soon, in part because of Metul's job. "He's still in his residency, and he still has things he wants to accomplish," she said. Waiting didn't bother her, because she was happy just being together.

Naomie now has something else in common with her Southern Charm co-star Cameran Eubanks: Cameran's partner is also an anesthesiologist. And like Metul, her husband Jason Wimberly isn't exactly running towards the cameras; he's avoided being onscreen for several seasons, but Bravo confirmed that he'd be popping up for a little cameo in Season 6. Maybe seeing his fellow anesthesiologist coast through filming gave him just the boost he needed.

Metul might not add "reality TV star" to his resumé, but perhaps viewers can expect him to show up to more gym sessions and Southern Charm events.