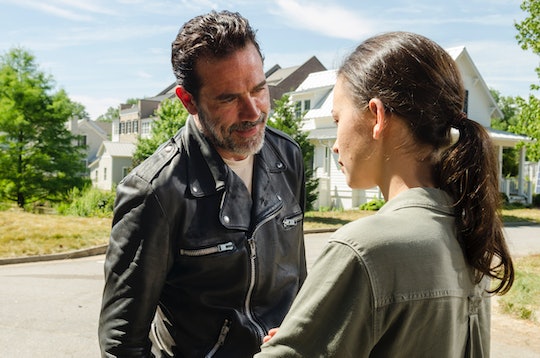 What Is Negan's Fate On 'The Walking Dead'? The Comics Reveal What Happened To Him

Negan's story is just getting started on The Walking Dead, but his fate has been sealed in the comics for quite some time now. The timeline of the comics is a few years ahead of the show, so all of the current, seemingly insurmountable struggles the characters are going through have already been handled and overcome on the page. Though Negan appears to have widespread and iron-fisted control over the entire region with no one entirely willing (or entirely able) to stand up to him, he does get taken down in the comics eventually. But how exactly does it happen? What is Negan's fate on The Walking Dead?

The reason Negan is so powerful is also part of what may lead to his downfall. Negan rules with fear, which keeps people cowering, but it also breeds resentment and anger. For every person too afraid to step up, there is someone willing to risk it all just to see him destroyed. In the comics, Rick was able to team up with the surrounding communities — the Kingdom and Hilltop — which increased his manpower and supplies. Then he took advantage of discontentment within the ranks of the Saviors themselves when a ready-to-rebel Dwight sought out Rick and Ezekiel so that he could secretly join their cause. Having someone on the inside helped a great deal when it came to Negan's eventual defeat.

Dwight's defection was what allowed Rick's victory in the end. When Negan demanded that Rick be killed with an arrow smeared with zombie guts that would infect him instantly, Dwight instead shot Rick with a regular arrow — giving him a much more manageable injury, while also making Negan believe he was a goner. This gave Rick the opportunity to catch Negan off-guard, which was precisely what happened. Though he wounded Negan, Rick didn't kill him and instead kept him prisoner in Alexandria for years. But, of course, that didn't last.

Negan was eventually freed by a disgruntled Alexandrian. But instead of seeking revenge for his imprisonment, he decided he wanted to help Rick out. Negan infiltrated the Whisperers (the current new threat, causing trouble for Rick and Co.), and killed their leader before returning to Alexandria with promises of good behavior. After everything he did, Negan wanted to be trusted. Whether that was a weird form of Stockholm Syndrome or a genuine attempt at redemption is anyone's guess, but personally I wouldn't trust Negan as far as I could throw him.

Though no one was particularly interested in trusting Negan in the comics either, he was allowed to try and earn his freedom in the fight against the Whisperers. That's what Negan is currently up to in the print version of this story, though he recently took a serious emotional blow when his beloved bat, Lucille (which is somehow still around) was destroyed in front of his eyes. Poor guy. It's always tough to lose your favorite murder weapon, but he'll probably recover.