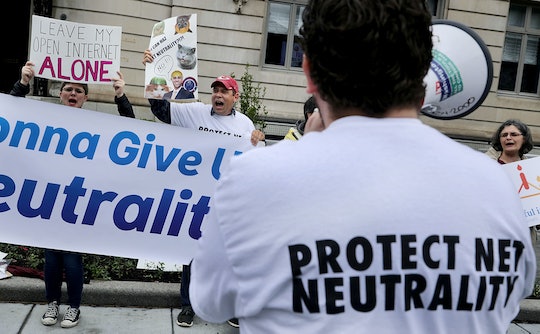 Here's The Scoop On Net Neutrality

On Thursday, the Federal Communications Commission (FCC) voted to begin the process of relaxing net neutrality rules that are meant, at their core, to ensure open and fair access to the internet. It's a more controversial issue than it seems it would be though, as what net neutrality is and what it represents changes depending on perspective. For the internet service providers (ISPs) like Verizon and Comcast that oppose the rules put into place in 2015, it means curtailing their ability to invest and innovate; content providers like Google and Facebook, on the other hand, insist that permitting these ISPs to favor some sites and apps and discriminate against others ultimately harms consumers.

And this issue does not escape the hyperpartisanship that now defines our political systems and institutions. When it came time to vote Thursday, the two Republicans on the commission opted to put forth a proposal to review the Obama era rules, according to The Washington Post. One the other hand, the lone Democrat, Mignon Clyburn, blasted the proposal as quest to "a wholesale destruction of the FCC's public interest authority in the 21st century."

Those who agree with Clyburn's liberal stance back the concept of net neutrality, which is the idea that ISPs cannot legally obstruct access to certain sites or apps, interfere with loading speeds, or charge fees to content providers in exchange for preferential treatment, NPR reported.

Those on the other side of the argument, of course, see it differently. FCC Chairman Ajit Pai, for example, believes that such regulations make it more difficult for ISPs to bring innovative products to their customers and unnecessarily stall the expansion of broadband, according to NPR. On Thursday, he compared the constraints to "the proverbial sledgehammer being wielded against the flea." Except in this case, there never even was a "flea" to begin with, he argued, attempting to drive home his point.

Those outraged about the fact that the FCC can now vote (in about three months) on whether to do away with the rules do detect a flea, though — or maybe they'd describe it more like an elephant. Protesters gathered outside the FCC headquarters in Washington, D.C., Thursday to decry the vote. One of them, Josephine Jones, told ThingProgress that the obliteration of net neutrality rules would be an affront to the First Amendment. "Once again, they’re trying to limit our free speech," she said. "Information is power, and if they limit access … they limit information."

Last Week Tonight host John Oliver's effort to encourage his viewers to speak up in favor of net neutrality dates back to 2014 — and may be responsible in part for the fact that the FCC received about 4 million comments on the subject before it voted to install the rules in 2015.

As of May 15, the FCC has received more than 1.2 million about the new plan to relax the 2015 rules, according to Roll Call. So, public input is on pace to match or even surpass the 2015 outpouring.

As with any ideological split in this country, people who care about this issue are arguing fervently both for and against it as they hash out what role, if any, the government should play in regulating businesses and weigh that against Americans' right to access the internet unencumbered.