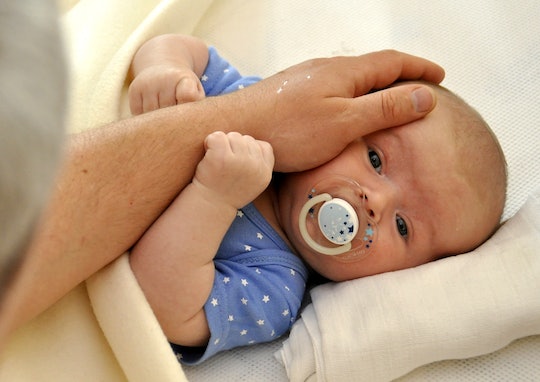 For many parents, and even parents-to-be, the temptation to pick up parenting book after parenting book is a very real one. Despite the fact that for millions of years of human history there were no such guides for parents, no classes or lectures, and certainly no scientific studies to inform their practices, in recent years the concept of "neuroparenting" has infiltrated Western society. What is "neuroparenting"? You may not have heard it by name, but the controversial "scientific approach" to raising kids has become a fabric of our culture. But should it be?

In an op-ed for the Washington Post this week, writer and parent Olga Mecking wondered aloud if the plethora of parenting books that encourage parents to treat child-raising "like a science project" do more harm than good. As a concept, "neuroparenting" isn't exactly new: as science has come to better understand how the human mind works, it's naturally led to questions about early brain development. Parents, then, are more aware now of how their baby learns. Whether it be language acquisition or first steps, these milestones are often a major focus for parents during their child's first year or so of life. And while it's true that a baby's early environment can influence their development, what parents do or don't do is not the only determining factor.

In her op-ed, Mecking cites a book by a U.K. researcher named Jan Macvarish which came out last year. Macvarish's criticisms of the neuroparenting movement stem largely from her observation that, by focusing on the neurobiology of development, the onus for caregiving falls primarily on to mothers (as it historically always has), and that — in the U.K. at least — neuroparenting has become something of a political argument. Former Prime Minister David Cameron has said that parents should have compulsory courses in parenting to ensure that their children grow up school-ready and well-adjusted — the implication being that these children don't end up costing the government money, be it for special education needs, healthcare needs, or interactions with the juvenile justice system. In one speech, Cameron asserted that parents "literally build babies' brains" — so, no pressure.

As Macvarish pointed out in her book, there are many reasons why a scientific approach to parenting creates undue stress for parents — namely, mothers. Firstly, as Mecking also wrote in her op-ed, current research in neuroscience is not wholly applicable to infant's brains, and within the scientific and medical community it's unclear just how much is really understood about early brain development. Mecking mentions that there's a tendency for scientific theory to "overrule" other ways in which knowledge is acquired or applied — say, through intuition and experience.

While in some areas of life, research that leads to efficient standardization has been extraordinarily helpful, is it really reasonable to assert that parenting could be similarly systemized? How a person parents is dependent on many variables that even the most robust scientific theory would be challenged to account for: experience, support, socioeconomic factors like income and education, preferences, location, religious and spiritual beliefs, the presence of a physical or mental disability, and perhaps the most unknowable at the outset: the baby itself.

Neuroparenting focuses on what parents must do (and insisting that they do it immediately, and early, and often) and consequently makes the child out to be evidence of a person's success as a parent. Not only does this put an enormous amount of pressure on parents — no doubt even breeding competition, at times — it completely negates the child's existence as an individual being. As Macvarish writes in her book, there are a lot of influences throughout a child's life that will determine how they grow up. The activities of their parents (who are certainly not always their biological mom and dad) are just one piece. While they are, inarguably, an important one, it may not be that a parent's devotion to early practice of "brain stimulation" or their adherence to strict guidelines to promote language are what mean the most in the longterm for their child.

Long before science was capable of showing us how the brain of an infant takes in, processes, and assimilates information, or parents could take classes on when to pick up their child for a cuddle — and for how long — people relied on their instincts. Parents learned in real-time, right alongside their new baby, how to interpret their preverbal communication. What worked for one child may not work for the next — even within the same family. Parents learn anew each time the personality of their baby, and it's that experience that is often one of the most marvelous and enjoyable things about raising a child. The bottom line is: loving a child is a highly individual experience. At times there's uncertainty and stress, and no parent is ever "perfect."

Of all the data that perhaps can be collected about a chid's development, and a parent's affect on it, there are some experiences that would be hard to keep track of: how many hours spent reading books before bed, how many monsters chased out from the closet, the number of drawings displayed on the fridge or hugs given. At the end of the day, the consistent love a parent has for their child is perhaps the most defining factor; one that science would be hard pressed to quantify.