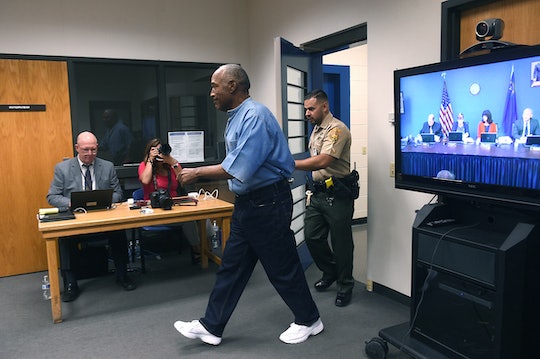 What Is OJ Simpson's Net Worth Now?

On Thursday afternoon, multiple outlets reported that O.J. Simpson had been granted parole after serving the minimum time for a nine-to 33-year armed robbery sentence. On social media, reactions are ranging from outrage to amusement, but Simpson being granted parole does beg the question: following his prison sentence, what is OJ Simpson's net worth now?

Unfortunately for the Juice, he's a much less wealthy man than he was at the peak of his career. According to court filings from his divorce from ex-wife Nicole Brown Simpson, in 1992 O.J. Simpson was worth about $10.8 million, which is equivalent to about $18 million today. Now, according to the Richest, he's only worth about $250,000.

Most of Simpson's finances were tied up in his lavish Brentwood estate on Rockingham Avenue, the house where Simpson's 1994 Bronco car chase famously ended after police sought him in connection with the brutal murders of ex-wife Nicole Brown Simpson and Ronald Goldman. (The property was later sold and razed by its new owners in 1998.) He was later found not guilty in both murders, though Goldman's family successfully filed a wrongful death suit against him.

According to the court filings, Simpson was also receiving a monthly salary of about $55,000 (or more than $95,000 in 2017), or about $1.1 million per year, thanks to his career as a spokesperson for Hertz rental car company. Hertz also severed ties with Simpson in the wake of his arrest, cutting off a major source of his cash flow.

Since he was famously acquitted of Brown's and Goldman's murders at the pinnacle of what was later referred to as the Trial of the Century, Simpson has fallen on hard times. Although he managed to financially profit off the trial with the release of his book I Want To Tell You, Simpson defaulted on his mortgage in 1996, causing him to lose his lavish Brentwood estate.

Following the civil suit ruling, Simpson spent a few years trying to scrounge up an income. He sold a book, If I Did It, a chilling hypothetical account of how the murders would have taken place if Simpson had, in fact, committed them. (The book was later canceled, and the Goldman family won the rights to publish it in a Florida court, as well as the profits from any subsequent sales. It was published in 2007 with the title If I Did It: Confessions of a Killer.) Simpson also toured the celebrity golfing circuit, and starred in a notoriously tasteless 2006 prank show called Juiced.

Yet his finances never recovered, and in 2007, Simpson was arrested and charged with armed robbery after trying to steal some of his sports memorabilia from a hotel room in Las Vegas. He was sentenced to 33 years in a Nevada prison, and following his parole hearing, he will be released on Oct. 1, 2017.