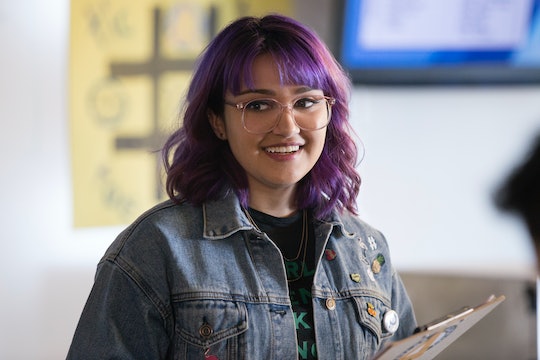 Old Lace Will Play An Important Part On 'Marvel's Runaways'

Hulu's first Marvel series is finally here and people are excited to see it. The new series, Runaways, follows a group of six teens who discover their parents are villains in a group called The Pride. Discovering their families' secrets, as well as their own powers, the teens decide to fight the adults in order to help the greater good. Assisting them in this endeavor is someone called Old Lace,. But what is Old Lace on Marvel's Runaways?

In the comics, one of the Runaways, Gert Yorkes, was given a gift from her parents. That gift was a deinonychus (a type of dinosaur) who Gert named Old Lace. Old Lace was genetically engineered in the 87th century by Gert's parents who also happen to be time travelers. When creating Old Lace, Gert's parents designed the dinosaur so that it'd have a "tele-empathic," or psychic, bond with Gert. So any pain that Gert feels, Old Lace feels and vice-versa. Their bond also allows Old Lace to instinctively know what Gert is thinking and feeling, which is why she's the perfect pet, even though she's a huge dinosaur.

Also, if you're wondering where the name Old Lace came from, in the comic books when Gert left her family to join the Runaways, she changed her name to Arsenic and named her dinosaur Old Lace, based on the popular play Arsenic and Old Lace. The story is about a man who learns the dark truth about his family (that his aunts have been murdering lonely men in their spare time), so you can kind of see the connection.

Old Lace was one of the strongest members of the group in the comics, and handily took out a number of the Runaways' enemies, including some of their parents. Additionally, while Old Lace can't speak, her relationship with Gert and the rest of the group is one of the more heartwarming aspects of the comics. Warning: comic book spoilers ahead!

It is also revealed that the psychic connection Gert and Old Lace share can be passed on to someone else. This is exactly what happened when Gert died in the comic series. She passed her connection to her fellow Runaway and love interest, Chase, before she died. This allows Chase to "control" Old Lace, but because of his love for Gert and his anger over having to see her die, he ends up using Old Lace in much more violent ways than Gert did.

Although Old Lace was only briefly seen in the trailer, fans shouldn't fear about her not being a big part of the show. At New York Comic Con, actress Ariela Barer, who plays Gert, explained that the show was very practical about bringing Old Lace to life, and rather than use CGI for the whole thing, they're using a puppet.

"The puppet they made is the most incredible thing. It takes six puppeteers, it has so much detail," she said. "There's literally one person pumping in air so you can see her inhale and exhale. You see her emotions. We don't not make use of that. She's around."

This is much different than what many fans expected and it'll be interesting to see if the choice pays off. However, the use of the puppet most definitely costs less than CGI so this practicality should make it easier for the show to include Old Lace more, which is great since she was such a big part of the comics. Plus, Gert without Old Lace just doesn't make sense.

You can see Old Lace, Gert, and the rest of the Runaways on Hulu. The first three episodes of the season are now streaming.