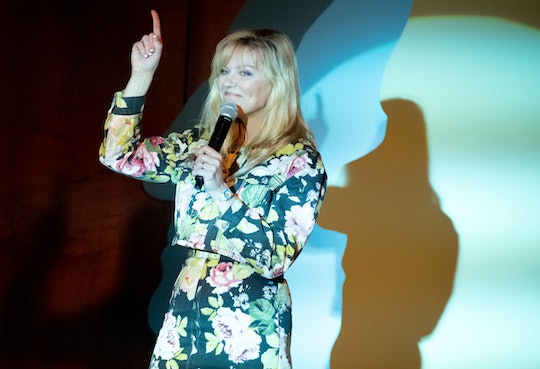 If shows like Stranger Things and GLOW left you feeling a little nostalgic about decades passed, don’t fret, because Showtime’s new series On Becoming a God in Central Florida has you covered. The dark comedy — which premieres on Aug. 25 — is set in 1990s Orlando, and stars award-winning actors, Kirsten Dunst and Alexander Skarsgård. If you’re thinking about diving into this blast from the past, you might be wondering what On Becoming A God In Central Florida is about.

The 10-episode series is centered around Krystal Stubbs (Kirsten Dunst), a minimum-wage water park employee who is pursuing her version of the American dream. When her husband Travis (Alexander Skarsgård) dies, she realizes he invested everything he had in a multi billion-dollar pyramid scheme organization called Founders American Merchandise (FAM). With nothing to lose, Krystal uses her relentless desire to succeed to lie, scheme, and con her way up the ranks of the company.

The show also stars Ted Levine as Obie Garbeau II, the FAM boss who sits at the top; Théodore Pellerin as Cody, the FAM insider who worked with Travis; Mel Rodriguez as Ernie, Krystal’s water park coworker and friend; and Beth Ditto, Ernie’s wife who remains skeptical about FAM and its claims.

Dunst talked about her character, explaining how she is forced to transform when she realizes her husband left her with nothing but products from the company, in an interview with The Wrap. “Krystal realizes she has all this merchandise that she doesn’t know what to do with, but realizes her husband, Travis, bought it, so she has to sell it all,” she revealed. “And it’s worthless because basically her husband just bought it and there’s so much and she has to sell it but, meanwhile, she has no one to sell it to. So she needs to find people who will buy this product that she doesn’t give a rat’s a** about. It’s basically crap, she thinks it’s all crap. So she has to sell all this crap — side note: she says crap all the time — and she, in order to make any money or make it work for her, she has to get more followers.”

While Krystal’s story takes place in the ‘90s, Dunst said it is a reflection of the current social media influencer culture. “It’s almost like Instagram,” she told the outlet. “It’s like the more followers you get, the more paid advertisements you get, the more money you make and all your followers are now buying the products you’re selling. I just realized this is a great correlation for the modern day people. Yeah, Instagram. A pyramid scheme.”

So, not only does the series take you back to the ‘90s, it also features a compelling story line and a cast of powerhouse actors. Now that you know what it’s all about, all you have left to do is tune in.

On Becoming a God in Central Florida premieres with its first two episodes on Sunday, Aug. 25 at 10 p.m. ET on Showtime.