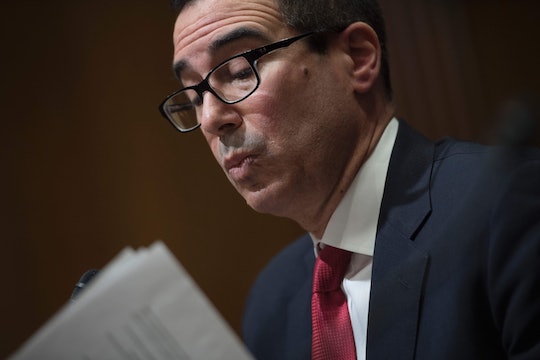 Steve Mnuchin's Past Has Come Back To Haunt Him

Another day, another one of President-elect Donald Trump's Cabinet picks proving to be even more troubling than originally thought. Today, it's Steven Mnuchin, who's being vetted as Trump's nomination for Treasury Secretary that's causing a ruckus. Of course, picking a former hedge fund manager and partner at Goldman Sachs seems like a reasonable choice for someone in charge of, ya know, finances. But to the surprise of approximately no one, Mnuchin is turning out to possibly be just as concerning of a pick as one would expect. On the docket this week: his involvement with OneWest, the bank he bought out and then renamed, which seems to be stirring up criticism from both sides of the aisle. So, what is OneWest? And what does it have to do with us regular people?

Update: In an email statement to Romper, a Mnuchin spokeswoman said,

"The Democrats are playing politics with catchy-sound bites that blatantly neglect Steven’s record as a loan modifying machine at OneWest who tirelessly worked to help families stay in their homes. Upon inheriting a portfolio with more than 170,000 loans in foreclosure, Steven Mnuchin ran a 'modification machine' that took extraordinary steps to save as many homes as possible. Publicly available federal documents show that OneWest offered 101,000 loan modifications to delinquent borrowers, including more than 7,000 where the borrower’s principal was actually reduced. The Obama Administration's HUD Department’s punitive rules forced many seniors from their homes, despite OneWest’s interest in working to find flexible options that would help seniors stay in their homes through loan modifications.

In addition, when HSBC (a trustee) refused to permit loan modifications loans, OneWest filed a complaint against HSBC to allow HAMP-eligible modifications to move forward in an attempt to help more families stay in their homes. In addition, OneWest bank had a very low error rate on the foreclosures that were made in compliance with government rules and consistently received a 3-star rating (the highest) from the Treasury Department.

Steven is proud of his record at OneWest. He was able to save three institutions that were in receivership, did tens of thousands of loan modifications, saving homes and jobs, and developed OneWest Bank into a regional banking franchise that in turn made loans to consumers and businesses that helped create jobs. He looks forward to discussing that record with the committee."

Well, remember that pesky little financial crisis going on in 2008? Remember how thousands lost their jobs and were pushed out of their homes? Yeah, well, unfortunately there were a lot of people who, during that time, were actually profiting off of others' crises. Mnuchin, some critics claim, may have (perhaps inadvertently) been one of those individuals, whether he meant well or not.

In 2009, Mnuchin and a group of his colleagues bought out the defunct IndyMac bank from the FDIC, and renamed it OneWest. The California-based bank was revitalized under Mnuchin's tenure as CEO, becoming profitable within one year of the purchase date. And while this may all seem well and good, there's more to the story.

According to Politico, "the company foreclosed on a 90-year-old woman after a 27-cent payment error." And this wasn't the only incident that has drawn speculation and negative commentary. Dubbed the "foreclosure king," Mnuchin came out of America's financial crisis with royally high sums. In 2015, OneWest merged with CIT bank, and Mnuchin walked away $10.9 million richer. That doesn't mean Mnuchin personally did anything wrong, of course, but it has served as fuel for an already large fire of criticism and led those who might already be against his appointment to the Treasury to double down on their efforts to dig into his background.

OneWest wasn't Mnuchin's only questionable business venture. In 2004, Mnuchin began investing in films, and he's credited with funding such blockbuster hits as The Devil Wears Prada, American Sniper, and more. But, of course, even his foray into the movie industry has since come under fire.

According to The Washington Post, Mnuchin joined up with Relativity Media, a production company, in 2014 as a "non-executive co-chairman and big investor." The Post reported that Mnuchin admittedly "wanted to help continue to 'build a global media company that is redefining what it means to be a content creator in the 21st century.'"

Then, a mere seven months after joining the media company, Mnuchin left; a short while later, the company filled for bankruptcy, leaving some to speculate over the timing of his departure and his tenure as an investor, though Variety at the time reported a representative had claimed "conflicts of interest" between OneWest and Relativity were to blame for his exit. Romper has reached out to Mnuchin and the transition team for comment on both ventures and is awaiting a response.

It's clear that Mnuchin isn't simply a Wall Street guy. His past endeavors have been much more far-reaching (and therefore susceptible to criticism) than most would expect. More importantly, they've left a trail of concerning coincidences on which critics are more than happy to pounce.