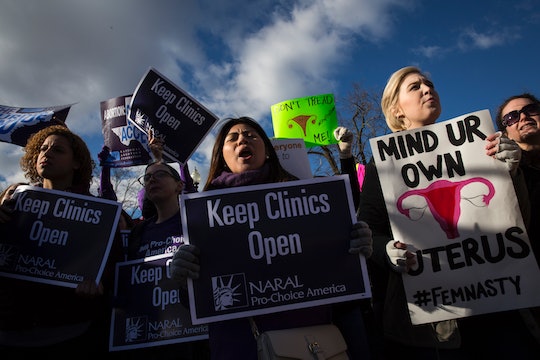 What Is "Partial-Birth" Abortion? It's A Political Term, Not A Medical One

Following a nationwide campaign by pro-choice groups urging the presidential debate moderators to #AskAboutAbortion, Chris Wallace finally broached the subject at the third and final debate, albeit in an unsatisfying manner. After allowing Donald Trump to thrice dodge the question on whether he wanted to see Roe v. Wade overturned, Wallace asked former Secretary of State Hillary Clinton why she voted against a ban on "late-term, partial-birth abortions." It's important to note that "partial-birth abortion" is a political term that has no basis in medicine. In fact, the phrase was made up by the National Right to Life Committee in 1995, according to NPR. The NRLC is, of course, an anti-abortion group, and not a medical authority.

The term "partial-birth abortion" was coined to make a procedure called dilation and extraction (or D&X) sound even more unpleasant than it already is, and to stigmatize women who have no other choice but to undergo it. To be clear, D&X is nobody's first choice. An abortion later in a pregnancy (after 20 weeks, or halfway through) naturally involves a larger fetus, which may have to be dismembered in order to be removed, which is known as a dilation and evacuation (D&E). But this can cause "substantial blood loss," according to NPR, and it carries a greater risk of cervical damage. So some doctors instead opt for a D&X, wherein the fetus is removed whole. While still inside the uterus, the fetus' skull is punctured in order to allow for compression so it can fit through the cervix. It is not, in whole or even in part, a birth of any sort.

That may sound a bit gruesome to some, but nobody takes D&X more seriously than the doctors who perform it, and the women who need to have them. When a woman has an abortion after 20 weeks, it's because there's something gravely wrong with the pregnancy. These are often very much wanted pregnancies where it's been determined at the 20 week ultrasound that the fetus will not survive, or that the mother's life is at risk. D&X is extremely rare; it accounts for only 0.17 percent of abortions, according to Guttmacher's most recent estimate. Women who choose D&X do so because their other choice was literally to die, or to watch their newborn slowly die, while suffering unimaginable pain. It's not a decision that's made lightheartedly.

Trump's claim that any type of abortion involves "rip[ping] the baby out of the womb in the ninth month, on the final day," is absolutely false. According to the Guttmacher Institute, the majority of U.S. abortions (65.8 percent) are performed at or before 8 weeks gestation, and in fact abortions after 20 weeks only account for 1.3 percent of procedures. Just 16 percent of abortion providers even offer the procedure at 24 weeks. Abortions, including D&X, are almost always performed well before the point of viability.

Fetal viability is inexact, and determined on a case by case basis, but it's generally accepted that it begins around the third trimester. As stated in the Roe v. Wade decision, "viability is usually placed at about seven months (28 weeks) but may occur earlier, even at 24 weeks." That decision also allowed for states to restrict abortion after the point of viability, "except when it is necessary to preserve the life or health of the mother," and 43 states have done just that. Viable fetuses aren't getting aborted on a whim; it only happens when the pregnancy is killing an actual living, breathing woman, and I really shouldn't have to point out that there's certainly no "ripping" involved. The pernicious myth of "partial-birth abortions," and the notion that any woman would intentionally carry a healthy pregnancy nearly to term, only to change her mind at the last moment, is insulting to women as a whole.

More Like This
Patrick Mahomes & Brittany Matthews Welcome Baby #2
14 Free, Printable Birth Plan Templates For Every Kind Of Delivery
Here’s What It Means If You Give Birth During A Solar Eclipse
Aww! 2-Year-Old Archie Is "Very Happy" To Be A Big Brother