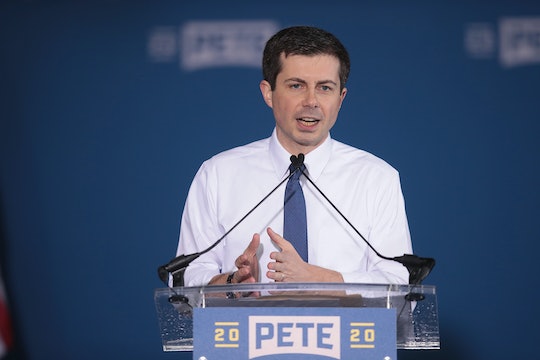 As the 2020 presidential election nears, people are educating themselves on the stances of each person running. South Bend, Indiana Mayor Pete Buttigieg is one of these people — the Democrat mayor is hoping to win his party's nomination come next year. Of course, some voters are wondering — what is Pete Buttigieg's stance on vaccines? With measles outbreaks on the rise, voters are concerned about this super important issue.

The measles outbreak in the United States in 2019 has been "record setting," according to NPR. In the past four months, there have been over 700 reported cases of measles in 22 states, according to data from the Centers for Disease Control and Prevention. Measles is being spread in communities largely due to "pockets of unvaccinated people." This isn't too reassuring — which is why people are looking to their lawmakers to take a stance and do something about it. Especially since the recommended dose of the MMR vaccine is 97 percent effective at preventing measles, according to the CDC, proving that vaccinations do work.

With Buttigieg's name rising in the polls, according to CBS News, it's only natural for people to wonder his stance on a variety of subjects, including vaccines. On Tuesday, BuzzFeed News asked all of the Democratic candidates their stance on vaccines, and a spokesperson for Buttigieg said: "The law of the land for more than a century has been that states may enforce mandatory vaccination for public safety to prevent the spread of dangerous disease. Pete does support some exemptions, except during a public health emergency to prevent an outbreak."

"These exemptions include medical exemptions in all cases (as in cases where it is unsafe for the individual to get vaccinated, and personal/religious exemptions if states can maintain local herd immunity and there is no public health crisis," the spokesperson added.

But early Wednesday morning, Buttigieg's team added some clarity to this statement, according to HuffPost, adding that he is aware that not vaccinating children has consequences. The spokesperson told BuzzFeed News:

"Pete believes vaccines are safe and effective and are necessary to maintaining public health. There is no evidence that vaccines are unsafe, and he believes children should be immunized to protect their health. He is aware that in most states the law provides for some exemptions. He believes only medical exemptions should be allowed."

This does provide a lot of clarity to his first statement. Especially since people on Twitter did not respond kindly to his original stance, taking to Twitter to share their reactions to it.

This wasn't the first time that Buttigieg has talked about vaccines — he has been a long time advocate for people to get vaccinated. In 2018, the mayor encouraged his Twitter followers to get their flu shots. "So easy and quick, and a very important way to protect yourself, your family, and our community," he wrote.

There are so many issues that politicians will have to take a stance on ahead of the 2020 presidential election — vaccines is just one of them. Although some people might have disagreed with Buttigieg's first statement about vaccines, there is no doubt that he is an advocate for them and their ability to protect children and communities at risk.