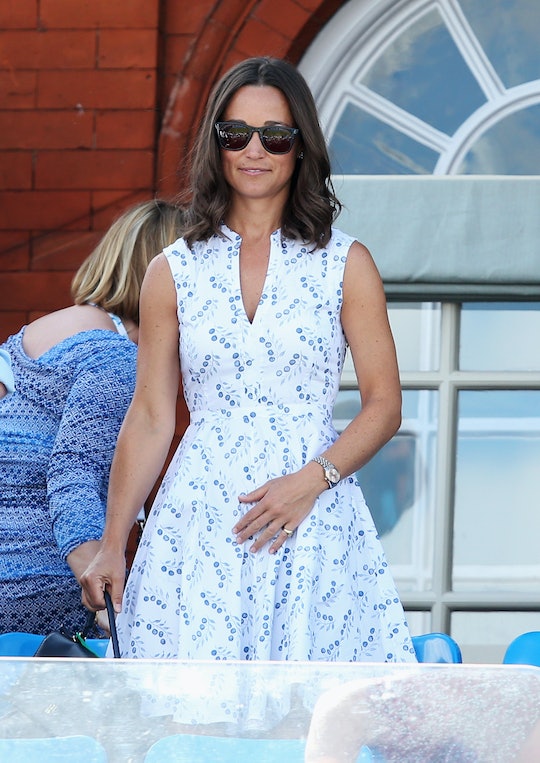 Nicknames are interesting; there are times you can tell someone isn't going by their given name, but there's also nicknames that just slip by. At some point, everyone comes to think it's someone's real name, which can cause confusion down the line. With the extended royal family back in the news as Pippa Middleton is reportedly pregnant with her first child, according to Reuters, some might be wondering: what is Pippa Middleton's real name and is her first name short for anything?

Pippa is definitely one of those sneaky nick names; I didn't even know that wasn't her real name until recently. The younger sister of Kate, the Duchess of Cambridge, has gone by Pippa ever since she first appeared in the public eye. But, Pippa's full name is actually Philippa Charlotte Middleton. According to ABC News, family members typically call her Pip. Given that Philippa isn't a common name, it makes sense that Pippa would go by a shortened version.

Interestingly, though, Pippa does have an aristocratic title to match her sister's. Pippa married James Matthews in May 2017, but what few people know is that Matthews is actually a nobleman himself. He is currently heir to the Scottish feudal title of Laird of Glen Affric, which means that Pippa will one day hold the title of "Lady Glen Affric," according to Daily Express.

Pippa will be able to use the title Lady Glen Affric in the Commonwealth, if she chooses to, after James inherits the title Laird of Glen Affric from his father. In terms of estate, the title refers to a 10,000 acre Scottish estate near Loch Ness in the Scottish highlands, according to the Daily Mail.

One of the greatest images of parenting is the struggle of choosing a child's name. Baby books seem to be expectant parents' new best friends in shows, so it's worth asking, what is the meaning behind Pippa's full name?

Philippa is actually the feminized version of the name Philip. It comes from the Greek name "Philippos", meaning "friend of horses", according to Behind the Name. The name Philip is popular throughout history; it was the name of five kings of Macedon and appears in the New Testament. But, the feminized version Philippa can be found throughout history, too.

In the Catholic faith, there is Saint Philippa of Pergen. Born in the 3rd century, she became known as a martyr and saint. In British history, there was Philippa of England, also known as Philippa of Lancaster, daughter of Henry IV, Queen of Sweden, Denmark, and Norway.

She was actively involved in state affairs during her husband's reign and acted as her husband's representative in Sweden. However, Philippa died fairly young, at the age of 35, on Jan. 5, 1430. Her health deteriorated after giving birth, for the first and last time, to a stillborn boy. Philippa was buried in St. Anna's Chapel, which she had built at the Vadstena Abbey Church, according to Unofficial Royalty.

Before Kate married into the royal family, Pippa had also been rubbing shoulders with noblemen since college. At the University of Edinburgh, where she graduated with an English literature degree, Pippa shared a house with Lord Edward Innes-Ker, a son of the Duke of Roxburghe, and Early Percy, heir apparent of the Duke of Northumberland, according to the Daily Express.

While Pippa's wait for the title of Lady Glen Affric doesn't make her part of the royal family, or put any of her children in line for the throne, it's still fascinating to trace how all these titles work. And although it hasn't been confirmed that Pippa's full name was in honor of any specific person, it's interesting to see some of the history behind it. It also makes people wonder: what inspiration will the reported mom-to-be turn to in order to name her child?