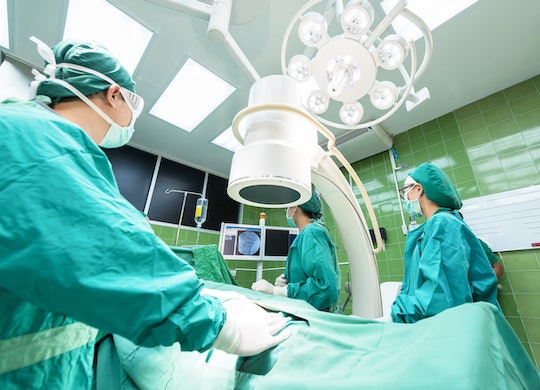 WTF Is Pitocin & Why Does It Matter In Pregnancy?

Some babies are eager to meet the world, whereas others seem more than content to hang out in the womb as long as possible. If you've tried everything short of an eviction notice to induce labor, but your baby stubbornly stays put, then it may be time to bring in medical backup. In these cases, your doctor may use Pitocin to help your labor along. So what is Pitocin, and how is it used to help you during labor? This drug is pretty great at coaxing babies out of the womb.

Pitocin, which is a U.S. brand name for oxytocin, is a hormone used to induce or facilitate labor, according to the Mayo Clinic. Basically, Pitocin stimulates contractions in the uterus by altering the concentration of calcium in the cells of the uterus, as noted by Drugs.com. If your labor does not begin on its own, then your physician may use Pitocin to kick-start the process.

If your doctor decides to use Pitocin, then it will be delivered through an IV line in increasing doses, according to New Kids Center. The timing of your contractions, cervical dilation, and exact dosage of the drug will be closely monitored, as further explained in New Kids Center. If all goes well, you should be able to deliver your baby in almost no time at all. This makes Pitocin sound a bit like a wonder drug, right?

The ability to finally deliver your baby is the biggest benefit of Pitocin, but the induction drug is not without its drawbacks. As noted in Healthline, risks of a Pitocin induction include infection, fetal distress, and even uterus ruptures. And, as registered nurse Jeanne Faulkner candidly explained in Fit Pregnancy, Pitocin tends to drop you right in the middle of intense labor without much of a warm-up, which has led many women to rank Pitocin labor as more painful than non-induced labor. Because of these risks, Pitocin is not used unless it's deemed medically necessary. That said, sometimes induction via Pitocin is still the best course of action for you and your baby, even if it hurts like crazy in the meantime.