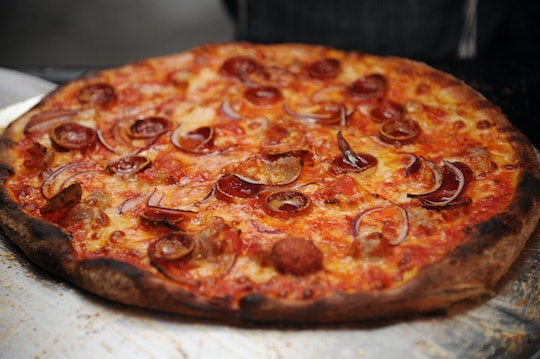 What Is PizzaGate? It Shows How Fake News Can Threaten Lives

Just when it seems like 2016 couldn't get any stranger — oh you know, the year America elected its first game show host as president — it just got a whole lot weirder thanks to something known as "PizzaGate." And even though the election is over, its shadow still looms large in the minds of many, and perhaps a bit too large in some very disturbed minds. What is PizzaGate? The hashtag moniker stands for a fake news story that became so viral in an election season packed with much vitriol, that it became almost impossible for at least one man to tell truth from fiction — and ultimately led that one man to shoot up a restaurant.

The #PizzaGate fake news phenomenon began in early November, just prior to the election. It all began on the website 4chan — where many anonymous memes are born — and then quickly spread across social media, particularly Twitter. With the momentum of social media, PizzaGate transformed from seemingly harmless internet lulz into a full-blown conspiracy theory embraced by the alt-right white supremacist movement.

So what news story could be so utterly unbelievable that somehow, entirely too many people did believe it? The heart of the PizzaGate tale was that the highest echelons of the Democratic Party — including Hillary Clinton — were operating a pedophile-run child sex trafficking ring out of a Washington D.C. pizza shop. And of course, none of it was true. But that didn't stop a 28-year-old man from shooting up the pizza parlor named in the false story on Sunday.

PizzaGate took off when the latest Wikileaks dump included emails from Clinton campaign chairman John Podesta. As media sites scoured the email leaks — as well as concerned citizens who were hell bent on finding something to pin on Clinton — someone on 4chan took the opportunity to cook up a good old fashioned urban legend.

A Twitter exchange between @RegressiveElf and @DJCPI captured the whole insanity of the PizzaGate conspiracy theory the best. "Imagine if I took a random tweet of yours & claimed it was a Rosetta Stone unlocking secret messages in your timeline," DJCPI tweeted. "but also you are a child molester using the powers of the united States government to protect yourself & rich friends." RegressiveElf nailed it in under 140 characters, tweeting, "it's like if the davinci code was written by channers [4chan users]."

While the PizzaGate story itself is complete fiction, the fact that someone thought it was real enough to shoot up the very real Comet Ping Pong pizza shop on Connecticut Avenue Northwest in D.C. over the weekend. The suspect in the PizzaGate shooting has since been identified by police as Edgar Maddison Welch, from Salisbury, North Carolina. Welch told police that he was "self investigating" the the PizzaGate conspiracy theory, when he allegedly pointed his gun at the pizza shop owner before firing his weapon inside. No one was injured. Welch did not immediately return Romper's request for comment.

There's no denying that fake news influenced the 2016 election, and in an age where media consumption is as simple as clicking Like or Share, and, as some would argue — the facts don't matter — it's easy to see how something as ridiculously stupid as the PizzaGate story could spread. And despite the fact that PizzaGate is a hoax, there are still plenty of people out there who truly believe it is real. What's more disturbing is that they might even be willing to turn to very real violence despite the falsehood, as Sunday's Comet Ping Pong shooting revealed.