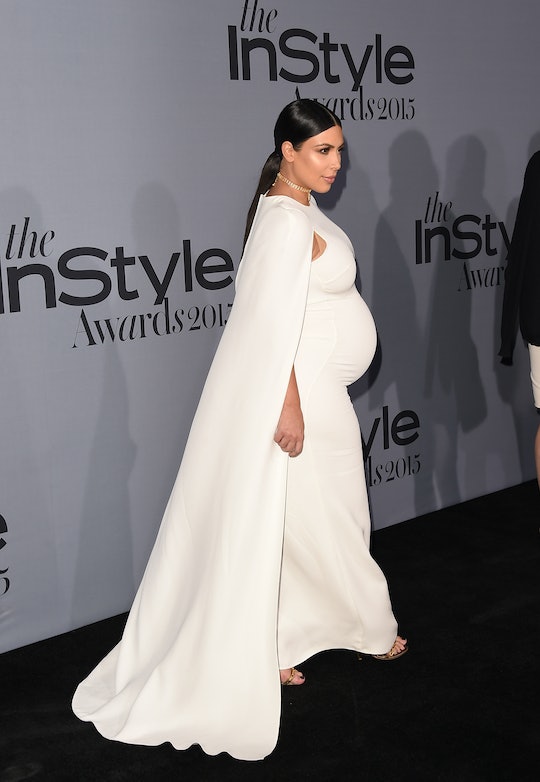 What Is Placenta Accreta? Kim Kardashian Brought Attention To The Condition, So Here's What It Is

In April, Kim Kardashian revealed that her first pregnancy with North West left her with placenta accreta, a condition which could complicate both the pregnancy and delivery of her second baby. If you heard that news and thought to yourself, "Uh, exactly what is placenta accreta, anyway?" Don't worry — you're definitely not alone in your confusion. For those of us who haven't had a baby (well, actually, a lot of people who have had a baby probably don't know about this condition either), it's a condition where part of the placenta (the thing that feeds a baby during pregnancy) fuses to the wall of the uterus (the thing a baby lives in during pregnancy). This can — as it did in Kim's case — cause a "retained placenta," which is when a placenta that remains in the mother's body after the baby has been delivered, instead of coming out in one entire piece as usual.

A retained placenta is relatively rare, occurring in only one of every 100-200 pregnancies. If it is the entire placenta being retained, usually the condition is diagnosed after 30-60 minutes and is often accompanied by heavy bleeding. However, sometimes only a portion of the placenta remains in the uterus, leading to symptoms that may show up after leaving the hospital, including cramps, heavy bleeding, smelly vaginal discharge, lack of breast milk, or fever. Fun! (Ugh.) While it's not a common condition, it is one to be aware of, since it can increase the risk of hemorrhages or obstruct future pregnancies.

Kim Kardashian has been open about her struggles with fertility after having a a retained placenta with her first pregnant with daughter North West, which resulted in her needing several procedures that make conceiving a second baby far more complicated. Kim told C Magazine:

I had this condition called placenta accreta. There were a couple of little operations to fix all that, so that created a little hole in my uterus, which I think made it really tough to get pregnant again. It was a long road. I would go to the doctor in Beverly Hills every day at five in the morning to get tested to see if I was ovulating. I was trying everything: I did acupuncture and got a nutritionist to eat healthier, thinking that was an issue.

And when it came to getting through her second pregnancy, and delivering her son on December 5, 2015, Kim was facing even more possible complications that could threaten her ability to have kids beyond her first two:

[T]hey think I’ll have placenta accreta again, so if the placenta grows a little bit deeper than it did last time, then they are prepared to have my uterus removed, which is a little scary for me. I think we’re just gonna go day by day, see how overwhelming it is, and see how the delivery goes.

If there's a silver lining to every hard thing Kim as endured during her path to parenthood, it's the very visible conversation about these issues that's been more at the public forefront than ever because of her. Kim has been endlessly vocal about not only the awesome parts about parenthood, but about the often unpleasant, difficult, and scary aspects of conceiving, carrying, and delivering babies. From body image issues, to public commentary about her pregnancy, to her fraught medical journey dealing with fertility problems, Kim isn't just about calling attention to herself and her famous family — she's opening up a very public dialogue about the reality of pregnancy and maternal health, and that is unquestionably a very positive thing.

More Like This
Keep Talking To Your Kids About Abortion — It's More Important Than Ever
Turns Out, You Can Dilate Pretty Far Before You Actually Go Into Labor
Everything You Need To Know About Colostrum Harvesting
Is Salicylic Acid Safe To Use On Skin During Pregnancy?