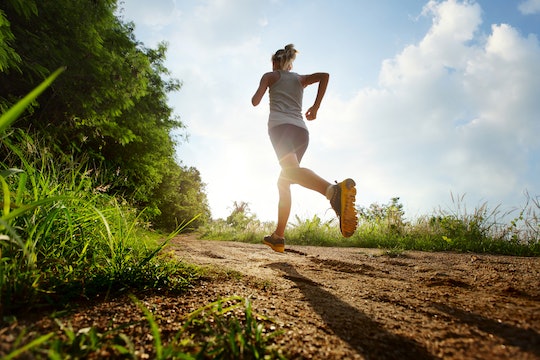 Resolving to start going to the gym in 2018 is something that many people did when they rang in the new year just two months ago. Whether or not they've stuck with this resolution all the way to March is another thing. But people might be motivated to work on their fitness in a new way by taking care of the environment while working out at the same time. If you're wondering why your streets are a lot cleaner, you might be wondering what plogging is — the new Swedish trend that is combining cleaning and getting in shape.

The Swedish are known for providing many great things into this world — IKEA furniture, ABBA, and Swedish meatballs — and now we can thank them for plogging. Plogging is a new workout trend taking Sweden (and now the world) by storm, according to Cosmopolitan, and is a combination of the Swedish word "plockka" (which means "picking up") and "jogging" — which is exactly what people do — pick up trash and run — when they plog.

Yes, it's that simple and won't cost you the ridiculous fees that a gym membership definitely will when you only go to the gym once a week. All it requires is a trash bag and a jogging route, according to the Washington Post, and maybe a few friends looking to get fit with you. If this isn't a good enough description to woo you into plogging, then this YouTube video of one man running and picking up all of the trash he finds along the way might convince you otherwise.

If you are already a fan of your weekly jogs, consider adding the "picking up trash" part of plogging into it. Unlike those weekly runs that keep you focused and in the zone, this just requires your attention to be brought to the ground and your surroundings, which doesn't seem like too rough of a transition.

And while this might not seem like much of a workout, the proof is in the numbers. 30 minutes of jogging and picking up trash burns about 288 calories, according to the Washington Post, thanks to the squatting and bending over movements that your body makes when picking up the trash. If only your mother told you this in high school chores would have seemed so much more appealing.

But plogging isn't just about working out — your environment, in addition to your body, will thank you too. If every person picked up a piece of litter a day, according to Oprah.com, there would be 300 million fewer pieces of litter. Littering is a huge problem, according to Keep America Beautiful. It costs money for the community in clean up efforts, it decreases property values, and can cause serious environmental contamination if it were to get in the wrong place.

It's just as easy for someone to pick trash up than it is for them to litter, according to The Atlantic. "People litter for reasons of convenience," Robert Cialdini, emeritus professor of psychology and marketing at Arizona State University told The Atlantic. "They don't want this thing. The question is why don't they litter since the easy thing is to litter."

This is where your plogging routine come in. Plogging is an act that you can easily teach your kids to do, too — teaching them that being active can also mean they can care for their environment at the same time. But you can only hope that this action would translate to your kids picking up their toys in the living room or cleaning their bedroom.

Let's be real — not every person the United States is not going to be taking up plogging right away. But if you do, knowing you did your part in helping reduce the amount of litter in your area and lower littering statistics is pretty cool. Not only are you helping your body (and that new year's resolution that might have come to a standstill), you're doing your part to help the space around you, too. How beneficial is that?

More Like This
Marie Kondo Gives Up Tidying Post-Kids, Sparking Joy For Moms Everywhere
Sally Field Is The Ultimate Cool Mom Who Once Tried To Set Her Son Up With An Olympian
10 Great Podcasts That Will Keep Your Kids Entertained On Your Next Family Road Trip
Does The FDA's Plan To Limit Lead In Baby Food Go Far Enough?
What Parents Are Talking About — Delivered Straight To Your Inbox