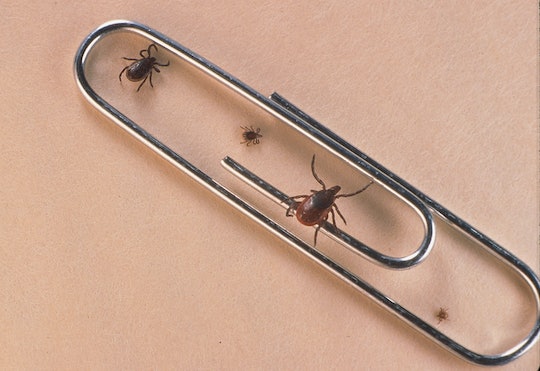 When it comes to tick-borne infections, health officials are warning families that this summer might be among the most dangerous on record. According to the Centers for Disease Control and Prevention, this coming spring and summer will likely bring more chances for kids to come in contact with ticks, as the tick population has increased in many states. And what’s more, the tiny bugs are more likely this year to be carrying a rare and potentially deadly virus. Families may already be familiar with lyme disease, but this year, it’ll be just as important to also know what Powassan virus is and how to spot an infection — especially if your kids will be spending time camping outdoors.

According to the CDC website, Powassan is a rare virus that causes brain swelling and other neurological problems in humans. Like Lyme disease, Powassan is spread through tick bites. The CDC considers Powassan (or POW) a rare disease, and infection has serious implications. While patients with Lyme disease can be treated with antibiotics if the infection is caught early, there is no medical treatment for someone who gets POW. Patients are often hospitalized and treated with IV fluids and respiratory support while the virus runs its course, according the CDC website.

Preventing exposure to ticks had been considered the best medicine. But that might not be so easy this time around.

Cornell University researchers have predicted a bad tick season this year, making contact with an infected bug far more likely. Ticks are common in the northeast and Great Lake states and their spring/summer population is usually tempered by the harsh winters in those regions, The Chicago Tribune reported. Since this past winter was milder than normal, the tick population is expected to flourish.

The CDC has recorded only 75 verified cases of powassan in humans within the last decade, but biologist Rebecca Eisen from the CDC’s division of vector-borne diseases told The Tribune that’s likely to change quickly:

Ticks that can transmit illnesses have expanded their geographic range and are now being found in places they weren't seen 20 years ago.

Of course, knowing how to spot and properly remove a tick is always important. But families should also be familiar with the physical signs that someone has been infected with the Powassan virus. In an interview with CNN, Dr. Jennifer Lyons, chief of the Division of Neurological Infections and Inflammatory Diseases at Brigham and Women's Hospital in Boston said that while most infected people won’t show symptoms, some will have symptoms that feel frighteningly similar to other common ailments:

You basically feel nonspecific flu-like stuff [like] muscle aches and pains; maybe you have a little rash on your skin, but almost certainly, you'll have a fever and the headache.

If the virus worsens, Lyons told CNN, it will do so very quickly and within days of the first symptoms:

From there, she gave a pretty grim picture of recovery:

About 15% of patients who are infected and have symptoms are not going survive. Of the survivors, at least 50% will have long-term neurological damage that is not going to resolve.

With no available vaccine, the best way to avoid powassan infection is to avoid being bitten, the CDC reported. That means avoiding areas with high grass or bush, and using repellent on skin and clothing that’s strong enough to protect against ticks. And parents should consider teaching children heading to camp this summer how to perform a full-body check for ticks or tick bites after coming indoors from tick-infested areas.