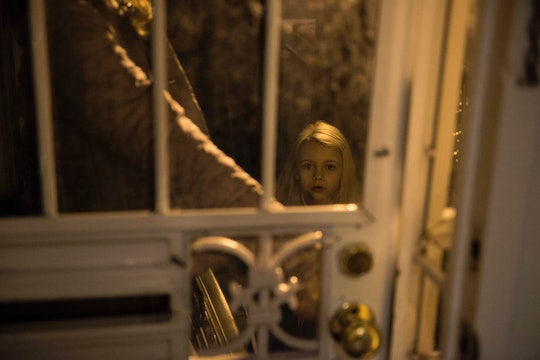 What Is Prairie's Backstory On 'The OA'? She's Had A Hard Life

(Warning: this post contains spoilers from The OA Episode 2.) The OA is Netflix's newest drama and it's a bit of mystery. The show tells the story of Prairie, a blind woman in her 20s who went missing seven years ago as a blind person who has returned to her family and can somehow see again. But while her given name by her adoptive parents is Prairie, she now tells everyone she prefers to be known as The OA, although it's anyone's guess what exactly that means. However, now that she's started having regular nightly meetings with her new five friends, viewers are getting a better handle on what happened to her during the time she was away and it's pretty interesting. So what is Prairie's backstory on The OA and how did she get her sight back? Well, fans get the answer to at least one of these questions in the first few episodes.

When Prairie was young, she was actually named Nina and lived in Russia with her father. Her mother died during childbirth, so it was just Nina and her dad. Nina would often have nightmares where she was trapped in an aquarium and couldn't breathe only to then wake up with a nosebleed. Her father helped her get past the nightmares, but one day when she was on her way to school with her classmates, she had another nosebleed and a bad feeling that she should get off the bus. The bus then got into a terrible accident and fell off the bridge, which resulted in Nina, along with everyone else on the bus, drowning in the cold water below. This suggests that her dreams were actually premonitions, hence why her body had such a stressful reaction (aka a nosebleed) whenever it happened.

However, when she died, a woman asked her if she wanted to go back and she said yes, although in exchange she lost her eyesight in the process. When Nina returned, her father sent her to a boarding school in America for the blind to keep her safe. Although her father promised they would be reunited soon, he unfortunately died in another "accident" and Nina was left with her aunt who spent the money Nina's father had given her for Nina's care. Nina had to leave her boarding school and lived in her aunt's house, where her aunt sold babies for adoption.

One day an older couple, Nancy and Abel, went to the house to adopt a baby, but Nancy found Nina and they chose to adopt her instead, renaming her Prairie in order to give her a fresh start. They took her home, but Prairie's dreams and visions persisted, causing her parents to take her to a doctor who said she was mentally ill. However, even with medication Prairie's visions persisted until she decided to leave home because she believed she was supposed to meet her father on her 21st birthday. However, instead of her father, Prairie found Dr. Hunter Hap, who ended up trapping her inside his basement.

It's obvious Prairie has had a rough life, but there's still so many questions that need to be answered. Why is she The OA? What does that stand for? How did she get her eyesight back? Hopefully we'll get more answers soon, but in the meantime, I have so much respect for her after everything she's been through. Let's hope the worst of her story isn't yet to come.