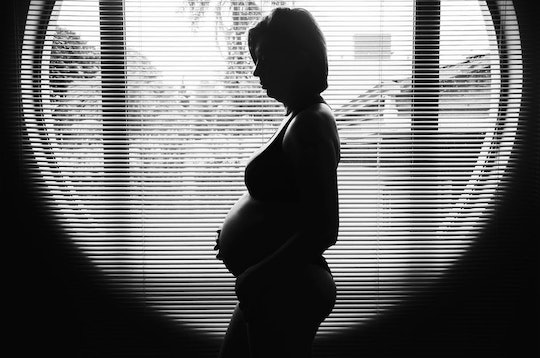 Pregnancy does a lot of weird, gross, and annoying things to an expectant mom’s body in just nine months. There’s the unwanted facial hair, hormonal acne that makes you feel like a teenager, oddly-placed skin tags, and sometimes a whole-body itch that keeps you up at night. While some of these bothersome pregnancy symptoms are to be expected, others' root causes need to be better understood. Now, one woman’s experience with severe itchiness is drawing attention to a relatively rare, yet serious condition that’s often dismissed as a just one of those strange things that happens when there’s a bun in the oven. So, what exactly is pregnancy cholestasis and what symptoms should pregnant women look out for?

Christina DePino recently shared on Facebook that she had an itch all over her body that was so severe that it was keeping her up at night. After complaining to her friends on Facebook, they urged her to get it checked out. And it’s a good thing she didn’t ignore them, because a doctor later diagnosed her with pregnancy cholestasis, a liver condition that impairs the flow of bile — a digestive fluid — that could spill into the bloodstream, which can in turn increase the risks for fetal distress, preterm birth, or stillbirth, according to the Mayo Clinic.

"[Pregnancy cholestasis] is basically harmless for me - except for the crazy itching - But could have caused a still born after 37 weeks!!" DePino wrote on Facebook on March 28. "I was officially diagnosed last week and had to get [the baby] out this week!"

Because there is no cure for the condition — officially called intrahepatic cholestasis of pregnancy (ICP) — and its complications are hard to predict, doctors may suggest inducing labor early, like they did with DePino. Healthcare providers may also opt to treat it with a medication called ursodeoxycholic acid, which can decrease the concentration of bile acids and is typically safe for both mother and baby.

According to the American Pregnancy Association, the most commonly noticed symptom of pregnancy cholestasis is itching, which can be moderate to severe and commonly on the hands and feet. While itchiness, sometimes combined with a rash, is often the only symptom commonly visible among patients who have it, expectant moms should also look out the following indicators:

According to ICP Care, a nonprofit that works to raise awareness about the condition, 80 percent of cases are diagnosed in the third trimester while only about 10 percent of affected women are diagnosed in their first and second trimesters. It's important to note, however, that this is a relatively rare condition — in the United Kingdom, for example, it affects about one in 140 pregnant women every year, according to the National Health Services.

Trying to figure out if you might have pregnancy cholestasis is tough considering that mild itchiness is one of those things to expect when you're expecting. And in most cases, the main culprit is typically a combination of hormones at an all-time and stretched tummy skin. But if it's all over — especially on your hands and feet — and it's so intense that you can't sleep, then it could be a sign of a more serious condition and it might warrant a doctor's visit.

More Like This
Yes, It’s Possible To Get Pregnant If You Have An IUD
Pelvic Pain During Pregnancy: What Causes It & How To Deal With It
New Study Finds Brains Of Teens Who Lived Through The Pandemic Aged Faster
Can You Give A Sleeping Baby A Breathing Treatment? Experts Explain