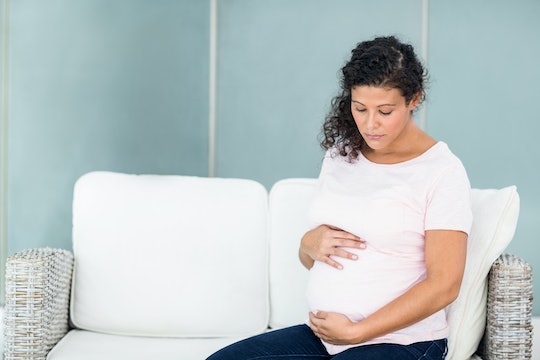 What Is Prenatal Depression & How Can You Get Control Of It

Although pregnancy is often portrayed as a blissful life experience, not all women get through those nine months unscathed. In fact, many expectant mothers experience symptoms of depression during their pregnancy. This may leade you to wonder what is prenatal depression, how common is it, and what is the best way to cope with the condition?

If you are coping with prenatal depression, you should know that you're not alone. As explained by the American College of Obstetricians and Gynecologists, 14 to 23 percent of women will experience symptoms of depression during pregnancy. And according to the Centers for Disease Control and Prevention, there are approximately 4 million births in the United States each year, which means approximately 560,000 to 920,000 women cope with symptoms of prenatal depression in the United States alone each year. In fact, as noted in the Huffington Post, prenatal depression is just as common as postpartum depression (which is finally receiving more attention). So if you're feeling isolated, just remember that almost one million Americans have been in your situation within the past year or so.

So what is the best way to deal with prenatal depression, and what types of help are available? After all, pregnancy limits your treatment options for everything: you can't even pop an aspirin for a headache. Fortunately, pregnant women may seek out psychological help such as cognitive behavior therapy (CBT), which can help you sort out the negative thinking that influences your mood, as explained by the Centre of Perinatal Excellence. Sometimes talking it out can go a long way toward alleviating symptoms of depression. If this isn't enough, however, medication may be an option. According to the Mayo Clinic, the risk of birth defects from antidepressant medication is low, and physicians may prescribe certain antidepressants that are considered safe during pregnancy. If you're wary of seeking help, remember that ignoring the prenatal depression altogether is not without risks, either. You may start to neglect your own health and nutrition, which could in turn harm your baby's development. Whatever form of treatment you prefer, it is a smart idea to seek out some form of professional help if you appear to suffer from prenatal depression. After all, you and your baby deserve a happy and healthy start together.