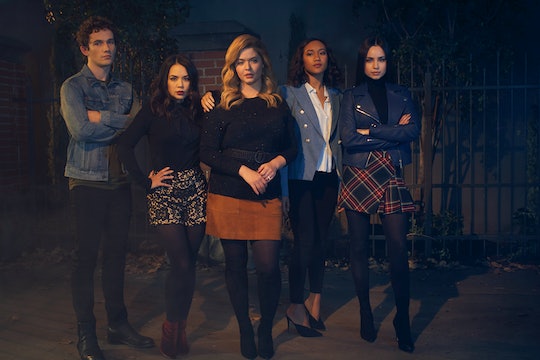 It's been two years since Pretty Little Liars ended its impressive seven season run on Freeform. During that time, its network home matured into its current name and brand — we all originally know it as ABC Family. Freeform caters to a slightly more mature, less wholesome audience than ABC Family did. Similarly, Pretty Little Liars: Perfectionists is all grown up, just in time for fans of the original series to tune in. "Grown up" could mean so many things, though. Is "A" back and terrorizing a whole new group who are moms? What is Pretty Little Liars: Perfectionists about?

Well, the girls are grown up, but they aren't moms yet. The show is based off of another series of books titled simply The Perfectionists, the show's creator Marlene King just took this series' plot and added a few of our Pretty Little Liars favorites to it (with Shepard's consent, of course) and presto, changeo, a whole new premise is born. In Pretty Little Liars: Perfectionists Alison DiLaurentis (Sasha Pieterse) moves to Beacon Heights, Oregon to start working as a professor at Beacon Heights University, and who does she meet there but Mona Vanderwaal (Janel Parrish), her former enemy who has also gone into the field of higher education. OMG! What a coincidence.

Those two characters will draw viewers in, but you'll also meet new characters — students at the university — and you'll probably get a sketchy feeling about them. Competition is in the university's DNA, as the title of the show suggests. So, while I don't know any of the show's secrets, I know there will be lying, cheating, mystery, and you know, the occasional murder involved.

You may be a little skeptical, because another spin-off of Pretty Little Liars, Ravenswood quite frankly just failed on so many levels, there's no way to put it nicely. But King doesn't want anyone to worry this time. “Because this show lives in the Pretty Little Liars world and tonally feels very much like PLL, I think fans are going to be really excited," she told Cosmopolitian when they visited the set.

The Perfectionists has been two years in the making, as King came to Parrish with the idea when the last episode of the original series was filming. She was on board right away and has high hopes that fans, whose tastes have maybe evolved, will appreciate the tonal shift of the spin off.

“I hope the fans of PLL who grew up watching the show will relate to this kind of new, mature version," she told Cosmopolitan. “It’s darker. It’s edgier. Things just feel a little bit more grown up. And it’s still just as juicy.”

Of course, the show's success will ultimately depend on the fans, but I don't think the cast has anything to worry about where dedication is concerned. Some seem to be taking stalking cues from the characters they love. Pieterse explained one extreme incident that happened on set to Good Morning America's Michael Strahan. "[Fans] are so dedicated and that's what we love," she said. "...Sometimes it gets a little illegal, but that's alright...There were a couple of drones, kind of spying."

Yikes! That seems a little scary and annoying to me, but the cast has a great attitude about the dedication. Just maybe...take it down one notch? You'll start getting some of the answers you want (and probably have so many questions) when the series premieres Mar. 20 at 8 p.m. ET on Freeform.