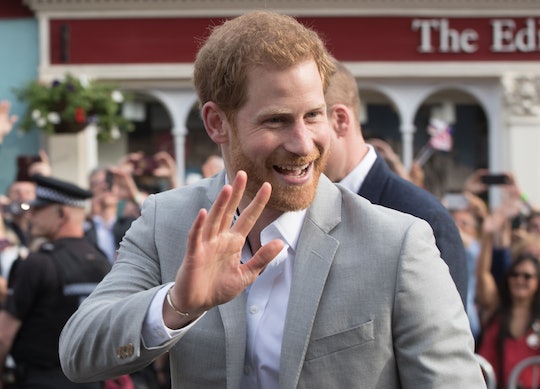 Royal titles are kind of a tricky thing to keep track of, especially for people who didn't grow up exposed to a monarchy everyday. It's easy to remember the basics, like the King and the Queen, but it gets a little more complicated when it comes to their descendants. With Prince Harry finally wedding Meghan Markle, many are now wondering: what is Prince Harry's title now that he's married?

In order to understand what title Prince Harry has now, it's important to understand the royal family's history and lineage. Prince Harry is the youngest son of Charles, Prince of Wales, and his late-mother Diana, Princess of Wales. He's currently sixth in line for succession to the British throne. The day before the wedding, Prince Harry's full title was simply Prince Henry of Wales.

Prince Harry's brother, Prince William, had a similar short and sweet title before marriage. He was named Duke of Cambridge by the Queen only hours before his wedding, in order to mark the wedding day. Knowing this, then, it's easy to see the precedent for Prince Harry's title to change. Now, he will be known as the Duke of Sussex, which had previously been vacant since 1843, according to The Sun. The Royal Family confirmed the name on Saturday via tweet (LOL).

Following usual tradition, Markle will be known as the Duchess of Sussex, and any children they have will bear the title "prince" or "princess."

The Duke of Sussex had long reigned as the most eligible title, according to the Telegraph. "They're quite limited in the titles that are available," Charles Kidd told the Telegraph. "I think the others are highly unlikely. Clarence hasn't been used for a long time and it's been sort of tainted by bad luck."

That bad luck, according to the New Yorker, was referring to the fact that one Duke of Clarence was executed by his brother as a traitor. Another, Prince Albert Victor, a grandson of Queen Victoria, found himself caught up in a scandal and died of influenza. Ironically, he was engaged to Princess Mary of Teck at the time. And, as the New Yorker reported, she ended up marrying his brother and is now Harry's great-great-grandmother.

It's logical, then, that the Queen wouldn't bother testing this luck and skipped over Clarence. The Duke of Sussex is unique enough as a title, anyway, since there was only one before, according to the Independent.

But, for those wondering, becoming a duke doesn't really mean anything outside of new status. Being named Duke and Duchess of Sussex doesn't give Prince Harry or Markle increased wealth; it's essentially just a nice thing for the Queen to do. Like a promotion, in some ways.

Prince Harry also gained two more titles, announced by the royal family, before his wedding. According Kensington Palace, he additionally gained the titles Earl of Dumbarton and Baron Kilkeel prior to his wedding, courtesy of Queen Elizabeth II. He joins a long lineage of Earls. Before marrying his late mother, Prince Harry's father already bore the titles Prince of Wales, the Duke of Cornwall, Duke of Rothesay, Earl of Carrick, Baron of Renfrew, Lord of the Isles, and Prince and Great Steward of Scotland, and Earl of Chester. At the moment, Prince William's complete title is Duke of Cambridge, Earl of Strathearn and Baron Carrickfergus.

Irregardless of whether Prince Harry gathers additional titles throughout his life, it's cool to see how some titles function within the royal family.

And for a final fun fact: The previous Duke of Sussex was married twice, but both marriages were unlawful as he didn't gain approval from the King. As such, Markle is actually the first woman to bear the title Duchess of Sussex. It's nice to see that the happy couple received titles that are as unique as them!