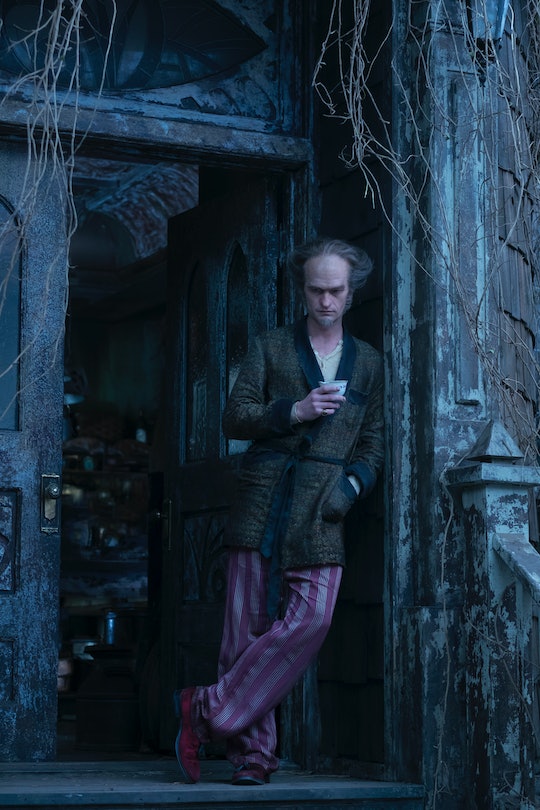 (Warning: this post contains unfortunate spoilers from Episode 8.) Normally, no one would be all that excited at the thought of going to boarding school, but when you've been through as much as the Baudelaire children on Netflix's A Series of Unfortunate Events have, school may start looking not so bad. Let's hope that turns out to be the case, because that's exactly where Violet, Klaus, and Sunny are headed next. Having run out of guardians for them, Mr. Poe dropped them off at a boarding school. But what is Prufrock Preparatory School on ASOUE and will it finally bring the children some semblance of joy?

Based solely on the information the episode provided, it appears this was the very school that Lemony Snicket and Count Olaf attended together as classmates. We see a photo of the two of them, looking awfully chummy in their youth, up on display in the building. So maybe this will be the place the children finally get some answers about their parents and what happened to make Count Olaf become such a villain in the first place. We also saw that two of the Quagmire triplets will also be attending classes there as well and will most likely be introduced to the Baudelaires in the very near future. But there's more to be known about this school than initially meets the eye. Warning: book spoilers ahead!

Prufrock Preparatory School is the setting for the fifth book of A Series of Unfortunate Events, titled The Austere Academy and is made up of a cafeteria, an administrative building, a student dormitory, an auditorium, a library, and a tin shack for orphan students. (Guess where the Baudelaires and Quagmires are going to live.) Obviously, Violet and Klaus will become enrolled students at the school, but in a hilarious twist, Sunny will have the most interesting time of all, serving as an administrative assistant to Vice Principal Nero.

It's unclear what classes Violet and Klaus will be taking or if this school is specialized to teach a particular set of people: perhaps those looking to become members of whatever secret organization the Baudelaires and Quagmires were apart of? Since Lemony Snicket and Count Olaf went there and are somehow intertwined with this mysterious corporation, it certainly seems possible for the show to take it in that direction. But sadly, these walls will not protect them from Count Olaf's grasp.

Eventually, he shows up in yet another disguise as a gym teacher named "Coach Genghis" and proceeds to torture them in various ways. This eventually leads to the school shutting down for a long period of time. So yes, Prufrock will end up being just as unfortunate of a place as all the other places the Baudelaire children have ended up in. But it'll still be interesting to see what they end up learning during their time there nonetheless.