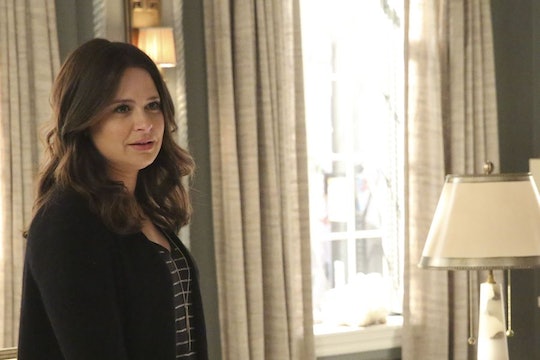 The 100th episode of Scandal is almost here and the new episode presents fans with an interesting question: what if Olivia didn't agree to rig the election that made Fitz president? Based on the preview, it looks like a lot of things would've changed, not just for Olivia but for all the other characters. So what is Quinn doing in the alternate reality on Scandal? Well, she may be royalty, believe it or not.

In a blink and you missed it moment in the new promo, you can see someone putting a tiara on Quinn's head. Although it's totally plausible she's getting a tiara for some other reason, it definitely looks like she's being crowned as royalty. However, how did Olivia not agreeing to the rig the election lead to Quinn ending up with a crown? Well, if you recall, Quinn wouldn't even be "Quinn" if it was for the election rigging.

Before changing her identity to Quinn, she was actually Lindsay Dwyer, who unfortunately fell in love with the wrong guy. Her boyfriend, Jesse Tyler, worked for Cytron, the company that helped rig the presidential election. In order to lessen the number of people that knew about the election rigging, Jesse, along with six of his other co-workers, were killed in an explosion.

Quinn was framed for the murder, so Olivia sent Huck to drug and kidnap her, leaving her in D.C. with the means to change her identity and become Quinn. The rest was history. Assuming the others that were involved in rigging the election didn't decide to just go ahead with the plan without Olivia, none of this would've happened in the alternate reality and Quinn would actually still be Lindsay. Still, that doesn't explain how she ends up with a... tiara? It's not like her boyfriend was royalty. Then again, maybe she realized he wasn't actually the one and found herself a prince instead. Maybe she became part of a beauty pageant? Or she's starring as a royal figure in a play? The possibilities are endless!

Instead, Quinn exchanges her toolbox for a tiara in the alternate reality episode, and it'll be interesting to see the insanely different path she would've found herself on if Olivia had just made one different choice.

The alternate reality episode of Scandal airs on Thursday at 9 p.m. ET on ABC.