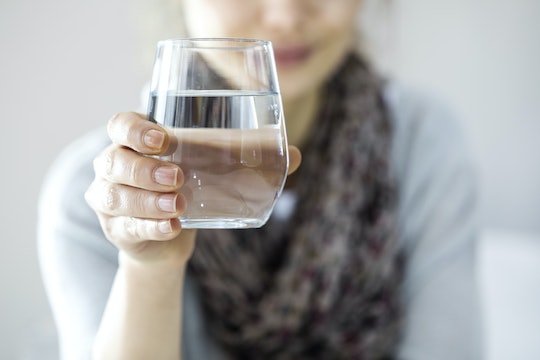 I love water. I mean, really love it. I grew up by the Atlantic Ocean, so water was a constant in my life. I love wading in water. I love splashing in water. I love living by water (being landlocked is destroying my soul right now). Most of all, I love drinking water — clean, filtered, treated water. Because you know what I don't love? Diarrhea. Yet, people are dropping tons of cash on "raw" water. What is raw water, you ask? It's a new "health" trend that's angering a lot of people — and with good reason. Not only is it dangerous, it's offensive.

Listen, I am not one for health fads in the first place, but this raw water craze coming out of Silicon Valley is one that I can't ignore. Why? Because people buying into it are so wildly oblivious of its implications. "Raw" water, in essence, is untreated, unfiltered, and "totally unsterilized" spring water, according to Popular Science. Or, in other words, natural water that's still rich in pesticide chemicals, life-threatening bacteria, and animal feces. That's right: Pesticides, bacteria, and animal feces. I can't bold those last two words enough.

But, for some reason, people around Silicon Valley are paying a lot of money to drink bottled "raw" water in the name of a healthy lifestyle.

The "raw" water movement has been around for a while, but it wasn't until recently, though, that startups have begun to cash in on the trend, according to The New York Times. Some of these companies sell gallons of "raw" water for upwards of $40, although the attention has caused prices to skyrocket, according to Business Insider.

It has a vaguely mild sweetness, a nice smooth mouth feel, nothing that overwhelms the flavor profile. Bottled water’s controversial. We’ve curtailed our water selection. But this is totally outside that whole realm.

Disciples of the fad believe "raw" water is an all-natural way of getting all those unique health benefits people want. Treated water, on the other hand, is full of drugs and chemicals that can hurt you, they claim, according to Vox. In fact, Mukhande Singh, the founder of "raw" water startup, Live Water, told The New York Times,

Tap water? You’re drinking toilet water with birth control drugs in them. Chloramine, and on top of that they’re putting in fluoride. Call me a conspiracy theorist, but it’s a mind-control drug that has no benefit to our dental health.

As Vox pointed out, small, trace amounts of prescription and over-the-counter medicine, as well additives from shampoo and soap, may end up in water, but research has proven they're harmless. As for fluoride, that unfounded conspiracy theory has a long history, according to Vox, but that's neither here nor there. What matters is: Fluoride has the ability to help prevent cavities and tooth decay, according to the U.S. Centers for Disease Control and Prevention. Fluoride in water, then, is beneficial to low-income children and adults who don't have access to adequate dental care, as Vox noted.

But here's what "raw" water can give you, according to Popular Science: Giardia, legionella, norovirus, campylobacter, cryptosporidium, salmonella, and E. coli. Basically, life-threatening bacteria and parasites that could make you very sick, if not kill you. And here's another thing: There are millions of kids around the globe — and here in the United States — who are suffering from these diseases precisely because they don't have drinking water.

That's what makes this "raw" water trend so offensive. People who buy into this fad seem to willfully ignore the fact that unfiltered, untreated water is downright dangerous. Not only that, but it's an absolutely privileged movement that disregards those who wish they had clean water in the first place.

Right now, thousands of people in Flint, Michigan are still — still — struggling to get clean water, according to CNN. For more than three years, residents of the Midwestern city have had to drink dirty water tainted with E. coli and other disease-causing organisms. At least 12 people died from a Legionnaires' outbreak during the height of the Flint water crisis, which led to charges against several Michigan officials, CNN reported.

And that's just in the United States. Water Aid estimates that over 840 million people and 31 percent of schools around the world don't have clean water. What's worse: A newborn dies every minute from an infection caused by dirty water and an unclean environment, according to Water Aid. On top of that, about 800 children under 5 years old die every day from diarrhea caused by dirty water and inadequate toilets, according to Their World.

When you consider those statistics, it's hard not to be angry at the "raw" water movement. After all, there are literally over 840 million people who are forced to drink untreated, unfiltered, and unsterilized water every day. That's over 840 million people who are at risk for a host of illnesses that could kill them. Yet, a bunch of people in Silicon Valley are drinking "raw" water like it's the fountain of youth.