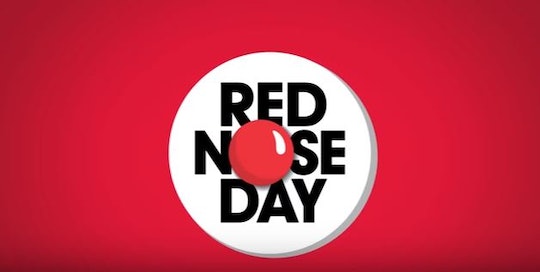 What Is Red Nose Day? It's A Fun Way To Take On The Serious Issue Of Child Poverty

On Thursday you might see your favorite news and media personalities donning a big, rubber red nose. There's a good reason. May 26, 2016 is "Red Nose Day," a day when wearing one of those clown noses means kids all over he world are getting help they desperately need. So what is Red Nose Day? It's a day-long campaign to raise money and awareness culminating in a two-hour long special airing Thursday night on NBC.

Red Nose Day was created first in the UK by movie writer-director Richard Curtis, the brain behind feel-good movies like Love Actually and Four Weddings and a Funeral. He founded a non-profit called Comic Relief Inc. which spearheads Red Nose Day and has raised more than $1 billion for kids in the poorest areas of the world over the past 25 years. Red Nose Day launched in the United States in 2015.

It's pretty easy to get involved. Just go to your local Walgreens or Duane Reade and buy a red nose of your very own. Share your red nose snap across social media tagged to #RedNose or #RedNoseDay. Of course, you can also just feel free to make a donation to the Red Nose campaign.

Go ahead and take a few minutes today to check out all the folks on social media sporting their red noses. It's pretty great.

And the Today Show is celebrating with a Red Nose Day challenge that will really get your heart pounding.

This is only the second year NBC has brought the live, national television Red Nose event to the United States.

And now, even Superman wants in on the fun.

There are many charities that are helped by donations from Red Nose Day, including the Boys & Girls Clubs of America, charity: water, Children's Health Fund, Covenant House, Feeding America, Ggavi The Vaccine Alliance, The Global Fund, National Council of La Raza, National Urban League, Oxfam, and others.

So run on down to your local Walgreens or Duane Reade and get a big, red nose of your very own, and share your picture with the #RedNoseDay hashtag.

And don't forget to tune into NBC Thursday to watch your favorite stars and learn more about how we can all pitch in to help kids in need all over the world.

Sounds like a great reason to get a little silly.