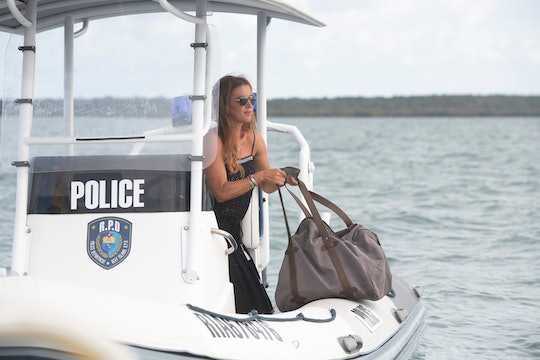 Poppy Montgomery Is Living A Fantasy On 'Reef Break'

When I first heard the title of ABC's newest summer drama I got surfer vibes. Surfers falling in love and putting themselves in extreme danger could be entertaining, right? I like my guess, but technically it's wrong. So, what is Reef Break about?

According to ABC's official description of the show, the crime drama stars Poppy Montgomery as Cat Chambers, a "thief-turned-fixer for the governor of a stunning and seductive Pacific Island paradise." So, it's more Catch Me If You Can and less Summerland than I thought. But that's just skimming the surface.

It turns out, calling Cat just a "thief" isn't doing her justice at all. As Montgomery told ETCanada, "The show is really unique in that it centers around a female surfer, a female criminal." She continued, "She surfs, she drives boats, she jumps out of planes. I mean, she does everything the boys get to do and more." That's my kind of heroine.

But Montgomery had more to say. "She's a lover and a fighter and she solves crimes. She's also you know, had a tricky past and never really settled in one place." On the first episode, viewers learn that Cat is returning to the Reef after a long time away. "She's arriving back to her past that she ran away from," said Montgomery in the interview.

I'm a big believer in vision boards and manifesting your reality. So, I love the story of this show because Montgomery says she literally willed the role into her life. "I came up with the idea for the show about four years ago and then the idea for the character and I made her a pro surfer and all of that because I think I wanted to live vicariously through her," she said in an interview with ABC. "So, all of the things that I always wanted to be, she kind of is, like, I love boats and jet skis and I love surfing. [She's] like my alter ego."

As for the kind of cases you can expect Cat to help solve, it's nothing too gloomy. "The cases that my character works on aren't murders and mysteries like that. They're not dark. They're more [about] modern-day pirates and, you know, a kidnapped heiress, and stolen yachts. It's very fun and free spirited."

That sounds like the perfect summer TV date to keep, perhaps paired with a wine spritzer, and Montgomery agrees. She told iHollywood TV, "I refer to it as the TV version of a summer beach read."

That's the content I need in my life every summer. Plus, Reef Break pretty much takes viewers on vacation while they're sitting on their couch because it was filmed on location in Australia. The surfing and other water stunts are real, too.

If an escape that probably features at least one boat chase sounds good to you, don't miss Reef Break this summer. Who wants to just dream of paradise when there's a show that will just take you there and take down criminals along the way?