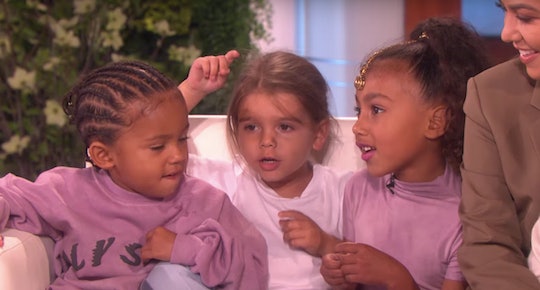 There's so much we know about the KarJenners. (The Disicks are included in this namesake, FYI.) After all, it's been over a decade that we've been watching them spill every detail of their lives on reality TV, apps, businesses and, of course, bustling social media pages. However, there's still a lot left to learn, especially for the next generation. For example, what is Reign Disick's middle name and is there any special meaning behind his cute moniker? After stealing the show on a recent interview he did with his cousins, mom and aunt, Reign is quickly becoming a new fan favorite.

For those who aren't, ahem, keeping up with the Disicks, Reign was born on Dec. 14, 2014, according to Bravo, which is coincidentally the exact same day his brother Mason was born back in 2009. As for 4-year-old Reign's middle name? It's Aston.

In an interview, his mom Kourtney Kardashian shared with People that when it comes to naming her kids, she's never completely sure until they're born. In fact, she had "Reign" on the list of names for Mason, but went with the latter because "Mason" means the same thing in English as "Kardashian" means in Armenian ("stone worker"). When she gave birth to Penelope, she had the name on the list again, this time, spelled "Rain."

When she first was pregnant with Reign, she thought she was having a girl, and "Rain" was once again the top contender for a name. "Once I was found out I was having a boy, we just changed the spelling again," she told People in 2015.

Kardashian didn't comment on where the name "Aston" came from, but with an "A" name, the initials became "RAD," which may or may not have played a role.

Reign is the third child of Kardashian and Disick's, and the fourth grandchild welcomed into the KarJenner world. However, he's recently started gaining more popularity after their family interview on The Ellen DeGeneres Show, in which he, well, kind of stole the show with how adorable he was.

It began when Penelope, Mason, Chicago, North, Saint, and Reign all sat down on the couch with "Lovey" Kris Jenner and Kourtney Kardashian, and Ellen asked them their names. The kids old enough to answer did. When Kourtney prompted Saint to reply, Reign shouted his name again, thinking it was that they didn't hear him the first time. (The whole time he also had his arm around Saint, which was pretty perfect as well.)

Later Reign talked over Kourtney, Kris, and Ellen's conversation, and when Kourtney asked him to "chill," he said he couldn't, because "he's a zombie." Then, he pointed to Saint unprompted and proceeded to tell the audience that "this human is adorable, he's fire."

The ordeal ended with social media fans flocking to call him the "next Scott Disick," and understandably so.

"Feel like Reign Disick was such an underrated Kardashian kid till his Ellen appearance, this kids need more air time," one fan tweeted. "Reign Disick has been my favorite Kardashian child since he was a lil baby. now he rose hell on Ellen and is finally getting the fame he deserves," another said. "All I want in life is to have a kid with Reign Disick energy,"said another. "Reign Disick just secured Kris Jenner's check till the day she dies.. That boy is getting his own show as soon as he becomes a teenager lol."

It's beyond clear that Reign is emerging as a fan favorite, though everyone adores all of the KarJenner kids equally. We'll have to see how Kris Jenner ultimately spins this into some kind of profitability, because we know she can and will.