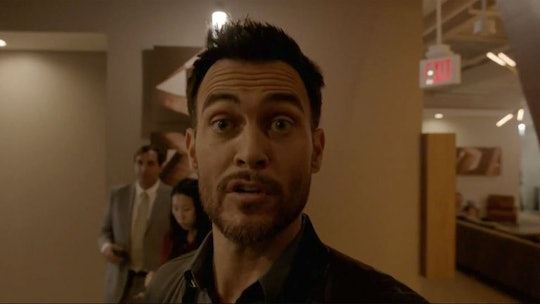 What Is 'Return to Roanoke: 3 Days In Hell'? 'AHS: Roanoke' Reveals The New Show-In-A-Show

With the apparent end of "My Roanoke Nightmare" after Episode 5 of American Horror Story's sixth season, many viewers were wondering where the season could possibly go from there. Well, the answer to that question came within moments on Episode 6 – the second half of the season is all about a "Return to Roanoke." But what is "Return to Roanoke: 3 Days in Hell" on American Horror Story: Roanoke?

As last week's promo for "Chapter 6" indicated, the sixth installment of Roanoke brought us "behind the scenes," so to speak. In the opening scene, we met Cheyenne Jackson's character Sidney, the producer of our show-within-a-show, "My Roanoke Nightmare." In conversations with the network executives and through the opening text sequence, it was revealed that "My Roanoke Nightmare" had concluded its run in 2015. The faux-show was a massive critical and commercial success, with little advertising needed and TONS of award nominations.

So it was no real surprise when Sid approached the network executives with his idea for a new show, a follow-up "sequel" of sorts to "My Roanoke Nightmare." It's pretty realistic actually – what producer (and network) wouldn't want to cash-in on their massively successful show with a follow-up, no matter how contrived the premise?

And contrived it was. The gist of the second series-within-a-series was basically "Big Brother: Super-Haunted House Edition."

According to Sid's pitch, he wanted to bring the entire cast back to the Roanoke house to relive the nightmare – but not just the "real" Millers. In addition to the "real" Shelby, Matt, and Lee, Sid was intending to bring in the entire cast who played each of the "real" characters as well as the various ghosts and monsters in the re-enactment.

The network execs were all for Sid's idea, but they shared a few complaints that viewers had about his first season – specifically, that they were unhappy about Mason's murder being unresolved. That was kind of hilarious because, honestly, I'd forgotten all about Mason's mysterious death. Sorry, but so many other things were happening right after that, and he just wasn't all that important!

Sid cleverly managed to spin that criticism and work it into the plot of his new season. He claimed that, by having everyone involved in the first season back in the house, they'd be able to manipulate things (via cheap production-designed scares) to get to the bottom of Mason's death (specifically, to prove his belief that Lee killed Mason).

Why ANY of these people would agree to go back to that creepy house is beyond me – particularly the cast, who don't have any actual reason to go back like Shelby does.

Of course, as was quickly revealed among the re-enactment actors once they were back in the house, the group of actors didn't actually believe the Millers' nightmarish story that they were re-enacting. Unfortunately for them, as Matt cryptically explained, they were filming "Return to Roanoke: 3 Days in Hell" at the house while in the midst of the Blood Moon – which hadn't been an issue when they were filming the re-enactments for "My Roanoke Nightmare." Something tells me this time around isn't going to go as smoothly.