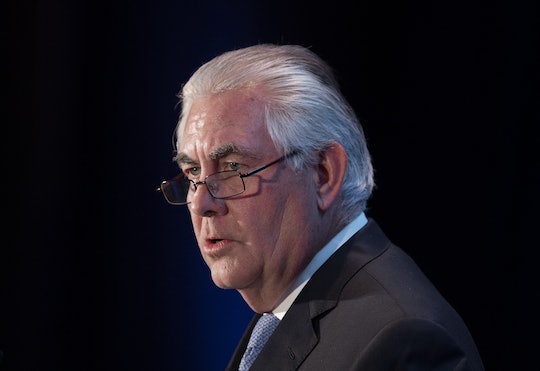 What Is Rex Tillerson's History At ExxonMobile?

There are tons of new faces entering the Trump administration and one of the most important ones is ExxonMobile CEO Rex Tillerson, who is slated to head up the State Department. Rex Tillerson's history at ExxonMobile will make the confirmation process a long and controversial one, since he has strong ties with Russia and possible conflicts of interest. Romper's request for comment was not immediately returned from the Trump transition team.

Tillerson, 64 years old, has spent his entire career at ExxonMobile, joining the company in 1975. He worked his way up the ladder, becoming the president of Exxon Yemen in 1989. Tillerson was made CEO of the company in 2006, largely due to his strength in dealmaking and forging relationships overseas for the company.

Upon nominating Tillerson, President-elect Trump said, “He’s much more than a business executive; he’s a world-class player. [Tillerson] knows many of the players, and he knows them well. He does massive deals in Russia — for the company, not for himself.”

As the CEO of ExxonMobile, Tillerson was not shy when it came to speaking out against American sanctions against Russia in 2014, which were put in place after Vladimir Putin invaded Ukraine. The sanctions tied up billions of dollars in business for ExxonMobile, which had to put all of its offshore drilling in Russia on hold. The company didn't fight the sanctions, but Tillerson said in 2014, "[ExxonMobile is] very anxious to get back to work there." According to NBC News, he also said at a shareholders' meeting that year:

We do not support sanctions, generally, because we don't find them to be effective unless they are very well implemented comprehensively and that's a very hard thing to do. We always encourage the people who are making those decisions to consider the very broad collateral damage of who are they really harming with sanctions.

As CEO of ExxonMobile, Tillerson has forged close ties with Putin, who is also likely to be very anxious to have the United States lift the economic sanctions. With the lift of the economic sanctions, the country could allow the company to resume drilling in the Arctic and Black Sea and help them tap into their natural resources — which would be a huge economic boost for the country.

Russia has been courting Tillerson for some time. In 2013, he was awarded the Kremlin's "Order of Friendship" award for his work in bringing the American company to Russia's shores.

Tillerson was already set to retire from ExxonMobile this year, since he would the company's mandatory retirement age of 65 this year. He will retire with around $300 million, including stock options and pension benefits, so whatever happens to ExxonMobile in the future will affect his personal bottom line, whether he is confirmed as secretary of State or not.

It might not be so nefarious that Trump nominated the head of an oil company that could seriously help Russia out, and also benefit from the deal, to head the State Department. But given Tillerson's lack of foreign policy experience and Trump's insistence on forging a new trade relationship with Russia, Tillerson's tenure as the head of ExxonMobile is certainly noteworthy.