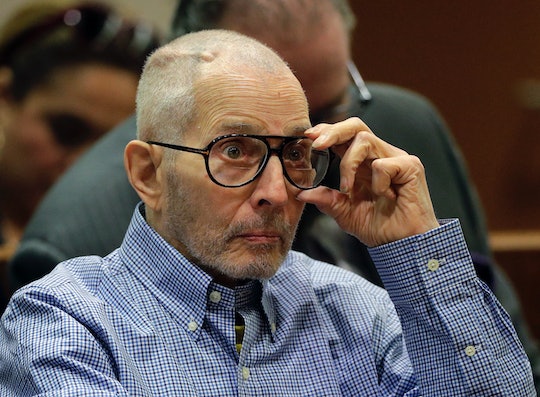 Lifetime's The Lost Wife of Robert Durst is a fictionalized take on a very real story that revisits the first marriage of real estate scion and suspected murderer Robert Durst. When it premieres on Nov. 4, it will detail what may have happened to Kathie McCormack Durst, who disappeared in 1982. Though Robert Durst had been in and out of the media for decades, HBO's The Jinx brought him back into the public eye. But what is Robert Durst doing now? His life has been forever changed.

The ending of The Jinx was one of the most shocking endings to a true crime series, ever. Most shows or podcasts like it provide new insights into older crimes but are not able to come to any concrete conclusions because so much time has passed or the evidence just isn't strong enough. But in The Jinx, it was different. Durst took a break during filming to go to the bathroom but had no idea his microphone was still on and he was still being recorded, allowing the production crew to catch him muttering that he had "killed them all." Durst was a suspect in the disappearance of his first wife, as well as in the murders of Susan Berman and Morris Black, though he was never convicted. Since the show ended, his life has undoubtedly changed — and not for the better.

In 2015, Durst was living in a Marriott Hotel in New Orleans and using the alias "Everette Ward" when he was arrested. He was found to be in possession of pot and an illegal firearm, and eventually received a sentence of seven years and one month for the weapons charge. He was extradited to California to stand trial for his possible involvement in the death of Susan Berman. Berman was a longtime friend of Durst's who was killed in 2000 by a single gunshot wound to the head. She was found in her home on Christmas Eve, though it was determined that she had died a day or two before. Durst was in California at the time of her death, but he could not be more definitively linked to the murder until new evidence emerged 15 years later.

After Durst's arrest, the LAPD said in a statement, as reported by the L.A. Times: "As a result of investigative leads and additional evidence that has come to light in the past year, investigators have identified Robert Durst as the person responsible for Ms. Berman's death." It has been alleged that he may have killed her because she knew too much information about the disappearance of his first wife. Durst has since pled not guilty, but is still awaiting trial.

It will not be the first time Durst stands trial for murder. After the remains of his roommate Morris Black were found floating in the Galveston Bay in 2001, Durst was arrested for Black's murder. However, Durst's lawyer Richard DeGuerin argued that it was a case of self-defense, telling the jury:

Morris Black died as a result of a life-and-death violent struggle over a gun that Morris Black had threatened Bob Durst with. As they struggled, the gun went off and shot Morris Black in the face.

In his shock over what happened, Durst dismembered Black and disposed of his body. (You know. A normal shock reaction.) Durst was found not guilty of Black's murder, but convicted of dismembering him.

Durst's health is also in decline. After being diagnosed with esophageal cancer in 2007, he told a prosecutor that he had five years to live. He has obviously survived much longer than that, but it was not the end of his health issues. According to DeGuerin, Durst has also suffered from hydropencephalitis (which can cause brain swelling) and underwent spinal fusion surgery back in 2016.

The trial and its results are still forthcoming, so until then all anyone can do is wait.