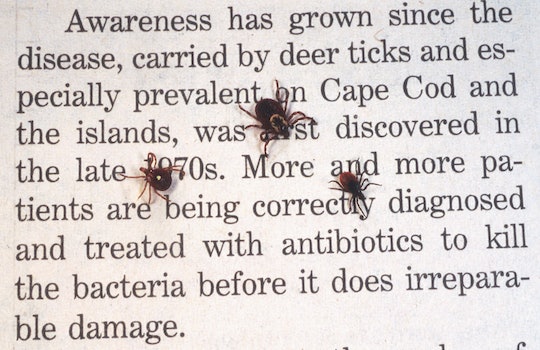 This Tick-Borne Disease Can Be Fatal For Kids

On Sunday, an Indianapolis family experienced the unthinkable when their 2-year-old, who had otherwise been healthy, died of an illness medical professionals believe she contracted from a tick bite. Kenley Ratliff had developed a dangerously high fever that refused to break, was being treated for strep throat, and, eventually, broke out in intense rashes over the course of about a week before her doctors began to suspect that she may have been suffering from the tick-borne Rocky Mountain spotted fever. And as the summer tick season emerges, parents definitely need to know what Rocky Mountain spotted fever is and how to spot it, because going too long without treating it can result in tragic outcomes like Kenley's.

By the time she died, Kenley had already become brain-dead because "her brain was so swollen from the weeklong fever," her aunt, Jordan Clapp, told CNN. She wasn't given doxycycline — which may have saved her had it been administered earlier — until after her brain started to swell and her organs started to fail, according to TODAY. Now, the little girl's grieving mom has a message for other parents about the fever, family friend Nichol Kirby relayed to WISH TV:

Be very diligent about checking their children for ticks, checking their animals for ticks making sure that those pets are treated ... [Kenley's mother] would be devastated to see this to happen to anyone else and I think she would just everyone to know how much she loved her baby girl that was her angel.

Kenley’s family doesn’t know when she may have gotten the tick bite, and it could take as long as two weeks for autopsy results to confirm that her illness did, indeed, stem from Rocky Mountain spotted fever.

In the meantime, though, it's definitely smart for other parents of young kids to become educated about the illness, which is fatal about 20 percent of the time it’s left untreated. According to the Centers for Disease Control and Prevention (CDC), its symptoms include fever, headache, nausea, vomiting, stomach pain, muscle pain, lack of appetite, and rashes, which may occur later than the other signs or no occur at all. The CDC also warns that a person may die within eight days of showing symptoms — which is exactly how long little Kenley was ill before she died. The key is to ensure that patients who have Rocky Mountain spotted fever are given doxycycline within five days of displaying the symptoms.

But perhaps the most effective line of action is to work to prevent tick bites in the first place. Biologist Jim Erwin told NBC affiliate WTHR that bug spray is key:

You'd use a product with DEET in it. It would be a repellent. You'd want to make sure you spray your pant leg, down low, because that's where the ticks are. They're going to be in the grasses, especially higher grasses, maybe knee-high.

Rocky Mountain spotted fever causes a bacterial infection, and it's most likely to strike in the warmer summer months, when ticks are most populous. Parents can steer their kids from danger by checking their bodies for ticks after they've been in wooded or grassy areas, treating pets for ticks, and treating clothing and other gear with the tick-killer permethrin, according to the CDC. It’s also a good idea for everyone to shower after they've been outside to dislodge any ticks that haven’t yet attached to the skin, and to use the opportunity to do a thorough self-check for ticks.

Adhering to the experts' suggestions will, hopefully, save lives. And the heartbreaking reality of Kenley's story should encourage all parents to do just that.