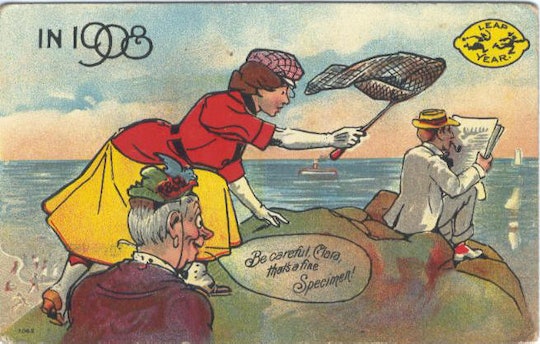 What Is Sadie Hawkins Day? It's An Outdated Tradition That Just Won't Die

When you woke up this morning, did things feel a little bit different, out of place, or like something had switched? Fret not friends, that's just Feb. 29 — Leap Day — creeping up on you. But today is also host to a kitschy folk holiday: Sadie Hawkins Day! I know you probably just looked at your iPhone and asked, "Siri, what is Sadie Hawkins Day?" — but I assure you the emotionless response of your virtual assistant doesn't compare to the rich history of this adorable American folk holiday that gives women permission to ask out — or even propose marriage to — men on this day, and this day only.

So where did this cultural experiment in gender role reversal get its start? Sadie Hawkins Day first appeared in Li'l Abner, a comic strip by Al Cabb, that told tales of hillbilly hilarity. Sadie Hawkins's father, Hekzebiah, is desperate for his 35-year-old daughter to marry. He organizes a race of the town's bachelors, where Sadie must chase after and catch a suitor. And, on Nov. 15, 1937, the Sadie Hawkins Day tradition was born via Li'l Abner strip. Tacking onto old Celtic folklore that women may propose marriage only in Leap Years, Feb. 29 has become associated with Sadie Hawkins Day.

In 2016, Sadie Hawkins Day might seem like a bit of an anachronism, but in some parts of the country and for a certain age group —I'm looking at you, high school teenagers — getting your Sadie Hawkins game on is a big deal. Many schools and communities will host a Sadie Hawkins dance, where all the single ladies get to ask eligible bachelors about town to join them for a dance. Similar to all the quirky high school prom ask stunts out there, teenage Sadies have been known to resort to equally punny tactics to snag a beau for the dance:

Is Sadie Hawkins Day a feminist holiday? In theory, yes: Women get the opportunity to empower themselves and take the lead in determining their own path to romance. But it certainly didn't start out with feminism in mind in the era of Li'l Abner: There's no doubt that Sadie Hawkins Day is a relic of institutional and cultural sexism from the early 20th century.

In a historical context, Sadie Hawkins is as much a trope for the desperate, man-hunting spinster that she was in Capp's comic as Sadie Hawkins Day itself is a jab at the very idea that women can make decisions for themselves. In 2016, a woman doesn't need permission to pursue a man in America. And, further to that point, who says women should only woo men — or even pursue romance, partnership, or marriage at all?

Sadie Hawkins Day holds a unique place in American folklore, so there are plenty of people who still get the warm fuzzies over this campy tradition, casually sexist as it may be. But it's just a dance, just an idea, just a funny little piece of Americana, right? No harm no foul, some might say — but you know what else lives in the annuls of Americana camp? Minstrel shows. Blackface. Or that one time Disney dressed up Donald Duck as a Nazi to help support World War II propaganda efforts by the U.S.

Even though I really shouldn't have a strong opinion one way or another about Sadie Hawkins Day — because it's been a long time since I had to ask a boy out on a date — I do. Telling girls it's okay to ask out the boys isn't empowering, it's unnecessary: In this day and age, women are already doing it. Reinforcing the idea with Sadie Hawkins Day is redundant and patronizing. And why should women's empowerment be relegated to once every four years, anyway?

You know what makes a lot more sense? Empowering women and girls to call out sexism when they see it. Empowering young women — and men — to fight rape culture. Empowering women to be okay with other women who have no problem being single, childfree, and independent — or women who want to settle down with Mr. Right and raise 10 kids.

Here's hoping that Sadie Hawkins Day fades away from our collective cultural embarrassment — sooner rather than later.