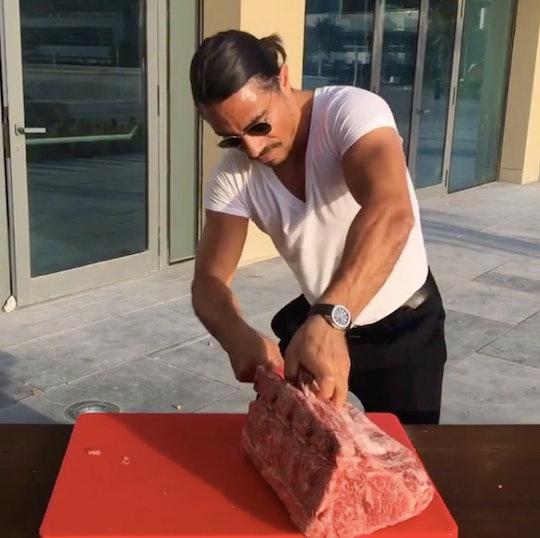 When the internet loves something, the internet loves something — and currently, it's obsessing about Salt Bae, the gorgeous chef who sprinkles salt so beautifully that it's meme-worthy. And not that you want to stalk Salt Bae online or anything (um, ahem), but just out of curiosity and such, you may be wondering what Salt Bae's real name is. And if he's on Facebook. And if he has a partner. And if he would treat you as nicely as he treats his cured meats.

Luckily for his hoards of new admirers, Salt Bae does indeed have a real name, and it's Nusret Gökçe. The Turkish chef is a co-owner of the fancy steakhouse Nusr-Et, a restaurant that has six locations throughout Dubai and Turkey. Unfortunately for the vegans and vegetarians among us, its tagline is "Meatlovers' favorite address." Fortunately for everyone, however, Gökçe is the face of the restaurant, and he appears in multiple videos and pictures for the steakhouse. In some, he's slicing meat; in others, he's simply posing and looking pretty fine.

Salt Bae — er, I mean, Gökçe — apparently grew up as part of a large family, left school early, and started his chef life as a butcher's apprentice. Now, the Istanbul-based chef owns his own restaurant chain, and it looks like he a pretty large family of his own, judging by an Instagram picture of himself and a bunch of kids, captioned, "The man who does not spend time with his family is not a real man." (Whether all of the children in the picture are actually Gökçe's offspring or not remains unconfirmed — despite the internet's love for the man, there's not too much personal information out there on him.)

According to an interview with a Turkish news outlet, Gökçe learned the art of butchering and cooking in Argentina and spent some time as a chef in the United States. He then opened a single restaurant in Turkey — and now employs 400 people. Gökçe told Aksam News that he has never taken annual leave or overtime, although he has worked 18-hour days.

Thanks to his famous meat-salting video, it seems like Gökçe might also be on his way to being an Instagram celebrity as well as a chef — which can only mean good things for his restaurant. In case you'd like to join the other 1.9 million users swooning over Gökçe, you can check out his Instagram pictures here. (Vegetarians, beware — there may be a lot of Gökçe involved, but there's a whole lot of meat, as well.)