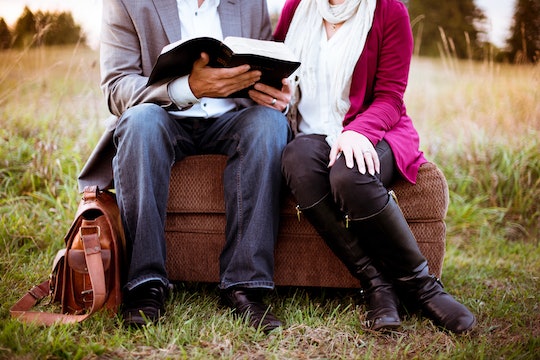 What It Means To Be Sapiosexual

Scientists will probably never quite figure out what it takes for two people to fall in love. Is it finding someone who loves you for the mess that you are as in Bridget Jone's Diary? Is it simply being coworkers like in Brokeback Mountain? Or is true love found while browsing in a bookstore, à la how Sally and Harry became friends (and eventually lovers) in When Harry Met Sally? For sapiosexuals, it's definitely the latter. But what is a sapiosexual, exactly, and how can you tell if you fall under that category?

Sapiosexuality is a new (and somewhat trendy) word that describes what it takes to be attracted to others. According to Psychology Today, a sapiosexual is someone who finds intelligence to be the most sexually attractive feature in their love interests and, therefore, it is someone who only dates people who are smart. Basically, they value the human mind and intelligence over looks.

According to the previously mentioned Psychology Today article, the origin of this term comes from the word "sapiens," which means wise or judicious, and the word "sexual." Additionally, Cosmopolitan noted that sapiosexual isn't just a buzzy word, but a self-identity for modern daters who appreciate a person's grasp on academia to be far more attractive than their looks and for those to whom talking about chemistry is the equivalent of dirty talk.

If you've ever sat on a stoop at 4 a.m. with someone who made such a compelling argument that it made you question your own logic or realize a bias you never knew, as one sapiosexual described in the aforementioned Cosmopolitan article, then this sexual orientation might apply to you. If you're more interested in what is on someone's bookshelf than the number in their bank account or how many times a week they hit the gym, then you might definitely be a sapiosexual.

However, this new term for a certain type of attraction isn't without its critics. For one, the term is seen as pretentious at best and discriminatory at worst, according to Broadly. Popular dating website OKCupid added it to their list of sexual orientations in November 2014, along with androgynous, asexual, questioning, and genderqueer, as a way to let intellectual users improve their user experience. Users responded positively, with the aforementioned Broadly article reporting that there are currently 9,000 users who identify as sapiosexual on OKCupid.

However, critics continue to point out that being pretentious is not a sexual orientation. Those that criticize sapiosexual as a "completely unnecessary term" equate it to the popular '90s term "metrosexual" and the more recently popularized "lumbersexual," according to The Daily Beast. That being said, identifying as sapiosexual may not be going away anytime soon, particularly because men and women have always craved intelligence in mates even before this term existed, according to the aforementioned Broadly article.

"When it comes to identifying traits we perceive as 'necessities' when searching for long-term mates, men and women of varying sexual orientations tend to put intelligence and kindness above other sexually attractive attributes, such as physical attractiveness," Lora Adair, a professor of evolutionary psychology at Lyon College, told Broadly.

Whether or not this term speaks to who you're attracted to, it doesn't seem to be going away anytime soon. With more and more people owning to the fact that they're primarily attracted to intelligence in their partners, there are tips to seduce the ultra-smart object of your affection. Start with sending an existential sext, such as "love discovers truths about individuals that others cannot see", and invite them to the next poetry reading at your local bookstore. Love on, sapiosexuals.

More Like This
50 Love Song Quotes That’ll Give You The Feels
Bringing Home A Partner For The Holidays Isn't Always A Hallmark Movie
50 Warm & Wise Quotes About Blended Families
How To Tell Your Partner You Want to Separate, According To Experts