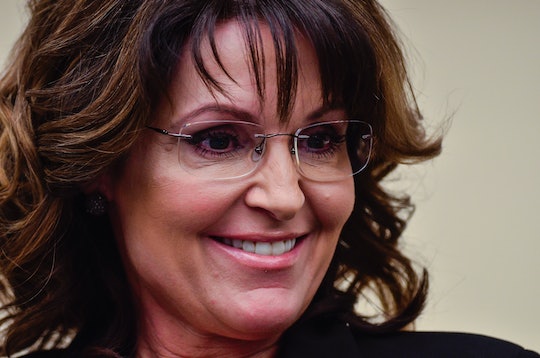 What Is Sarah Palin Doing Now? She May Still Be Vying For A Place In Trump's Cabinet

It's been seven years since she left office, but the former governor of Alaska has managed to stay in the news ever since. After she endorsed President-elect Donald Trump in January, many assumed that she wanted a spot in his Cabinet, and if you're wondering what Sarah Palin is doing now, it still seems like she may be interested, although their relationship has gotten a little rocky as of late. But considering the people Trump's already chosen so far, it would make perfect sense.

Politico reported that Palin was an early contender for the Department of the Interior, which would seem to make little sense, given her lust for oil. But Trump's Cabinet is reportedly being assembled using the principals of Opposite Day – an education secretary that's against public education, a climate change denier as head of the Environmental Protection Agency – so the champion of "Drill, baby, drill" would have fit right in. But she may also be in the running for the secretary of Veterans Affairs, a subject she just can't seem to stop tweeting about. Boy, does she love herself some vets!

She's also fond of reminding the public that her son, Track, once served in the Army, and once implied that the Obama Administration was at fault for Track assaulting and threatening his girlfriend with an assault rifle, because Obama didn't respect him. According to Salon, Track was originally charged with fourth-degree assault, fourth-degree misconduct involving a weapon and interfering with a report of domestic violence, but eventually struck a deal wherein he pled guilty to just the weapons charge, and agreed to enter a treatment program.

Palin recently took a swipe at Trump and his team, though, over a deal it made with the air conditioner manufacturer, Carrier. In a deal reportedly brokered by Indiana Gov. and Vice President-elect Mike Pence, according to CNBC, Carrier agreed to keep its plant (and roughly 1,000 jobs) in the U.S. in exchange for $7 million in "financial incentives." Palin referred to the deal as "special interest crony capitalism" and warned that it left the door open for other companies to threaten to move overseas in exchange for similar deals, effectively blackmailing the government. In response, Glenn Beck rudely accused her of having "a brain aneurysm."

Politically, Palin hasn't really been up to much lately, other than stumping for Trump and making sure that all of America knows her opinions about each and every issue. She famously offered Trump some nonsensical unsolicited advice on choosing a running mate back in June, and spent July going on tirade after tirade against the Black Lives Matter movement, both on Facebook (her preferred medium) and on Breitbart radio, where, according to The Huffington Post, she called the protesters "thugs." And as far as income goes, she's supposed to have a TV-judge show coming out next year, according to People, although she has no law degree or education.

But the most recent news about Sarah Palin is perhaps the most entertaining of all. After the Mall of America announced last week that it had hired a black man to play Santa Claus for the first time, sending racists into a tizzy, a rumor began circulating that Palin had called for a boycott, claiming that Santa was described as white "in the Bible." The story, though hilarious, was untrue, and it took only two days before Snopes called it out. What's interesting is that a story that outrageous was believable to so many. Honestly, she's said some pretty outlandish stuff before, and I can't see her stopping any time soon. Idea for the Trump transition team: Palin for press secretary?