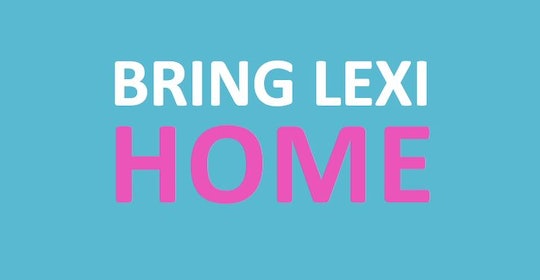 What Is "Save Lexi" About? A Little Girl Caught Up In The Foster Care System

By now you might have seen or heard about a campaign to "Save Lexi" which is using public and media pressure to influence the courts to keep a little girl in her California foster home. It's a complicated story, to be sure, and the grief of one foster family and their desperate efforts to keep the little girl they love as their own has ignited a firestorm of attention. So what is "Save Lexi" all about? Sadly, at the center of the media circus is a little girl caught up in the system and caught between the adults trying to find her a permanent, loving home once and for all.

Lexi is a 6-year-old girl who has already been through so much. At 17 months she was removed from the care of her parents and then placed in a foster home. Since she was 2 years old, she has lived with the Page family in California with dad Rusty, mom Summer and their three biological children, according to People. But, when they brought Lexi into their home, the Pages knew they would never legally be allowed to adopt her permanently. Lexi is one-64th Native American and that tiny sliver of heritage puts the little girl under the rules of the Indian Child Welfare Act, meaning she would never be able to be adopted by the Page family. But the Pages didn't care, they loved the little girl and worked on Lexi's "case plan," which was to be reunified with her father.

But Lexi's biological father, for whatever reasons, wasn't able to complete the court-ordered checklist of parenting classes, counseling, and drug testing required to reunify with his daughter. Instead, he asked that Lexi be placed with distant relatives in Utah, so he could maintain some contact with the girl.

The Pages, now faced with the realization that Lexi wouldn't be reunified with her father, decided to do whatever they could to keep her, despite the fact that foster care is temporary, and the courts had been clear about their ineligibility to become Lexi's legal parents. But the Pages decided to dig in.

"When we learned it wouldn't be reunification anymore, it felt like why wouldn't we fight for her?" Rusty told People. "To her, we had become mommy and daddy and to us, she was our child."

But the courts ruled otherwise and put a plan in motion to place Lexi with her Utah family to be permanently adopted. And, although the Pages said Lexi only knew them as her parents, Lexi's lawyer said she had been prepared for the transition.

Lexi, according to Leslie Heimov, Executive Director of the Children's Law Center of California, which has provided Lexi with legal representation since 2011, told People the girl has formed a bond with her Utah family over a series of visits and that placing her with the Utah family will allow her to grow up with her biological half-sister and another sibling who lives in the area.

On Monday, DCFS showed up to remove Lexi from the Pages home and take her to Utah. The Pages decided to invite hundreds of media and protesters from the community to try and fight for Lexi in the media and to put pressure on the courts to reverse its decision.

Here's live video shot of little Lexi being picked up. It was an ugly, gut-wrenching scene that's been shared all over social media. You can decide for yourself whether you think the Page family's public display was appropriate.

Lexi's removal was just the beginning of the Page family's effort to fight for the little girl. There's an effort to organize the public around protests and a "Bring Lexi Home" petition and letter writing campaigns to influential government officials. Supporters are rallying around the Save Lexi Facebook page, where the Pages are asking their community for support. Here's an image of #SaveLexi protestors outside the Los Angeles U.S. Courthouse.

This entire mess highlights the impossible position many children and foster parents find themselves when they're caught between the law and their emotional attachments. Here's hoping Lexi is able to adjust to her new home in Utah and that the Pages are able to find some peace and solace in the time they were able to spend caring for their Lexi. In the meantime, the #SaveLexi campaign shows no signs of slowing down.