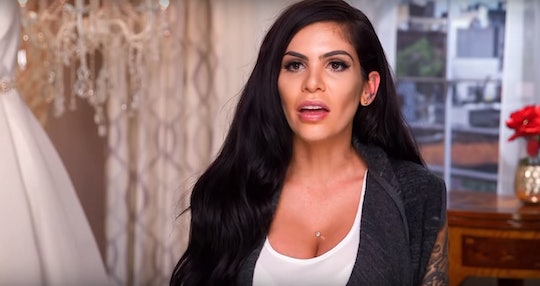 'Say Yes To The Nest' Is Like 'House Hunters' For Newlyweds

Each episode features a different newlywed couple who is ready to buy their first home together. Whether they need more space because of their growing family or they are just ready to take the next step after taking the even bigger leap of marriage, there are different couples and different stories each week.

Say Yes to the Nest is basically what happens when you mix Say Yes to the Dress and House Hunters, complete with a sometimes extravagant budget. But if you’re a newlywed who is also on the brink of searching for your first home with your new spouse, it might be the perfect show to inspire you and make you search for the perfect combination of subway tile and crown molding.

The Say Yes to the Nest premiere featured Cami Li, a memorable bride-to-be from Say Yes to the Dress who went on the show in search of a black wedding dress, much to the surprise of literally everyone. She and her new husband, Brent, kicked off the newlywed house hunting series and proved that the fun of marriage doesn't stop with figuring out a wedding budget, but continues with arguing over whether or not square footage matters over an updated home.

Right now, it looks like each couple featured in Say Yes to the Nest gets just one episode to find their dream home. Although the newlyweds are likely former fan favorites from Say Yes to the Dress, the new house hunting reality show definitely shows another side to these couples. But while the search for a house is much different than finding the wedding gown of your dreams, there is still plenty of drama to go around as these couples work to figure out the dream house that suits them best.

Howard Lee, president and general manager of TLC and Allison Page, president of HGTV, told Variety in a statement that the plan was to allow longtime fans of Say Yes to the Dress expand their interest in the series with a bona fide franchise. "For years, viewers have lived vicariously through the brides featured in our signature wedding series Say Yes to the Dress, and now with Say Yes to the Nest, they can explore post-nuptial bliss with newlyweds who are preparing to plant roots and spend 'forever’ together,'" they said in the statement.

It’s not unlike TLC’s former series A Wedding Story, A Baby Story, and Bringing Home Baby, which all followed the stories of different couples, sometimes all the way through. There’s no word yet if Say Yes to the Nest will eventually segue into another spin-off about the couples starting families, but it wouldn't be surprising if that is the goal. For now, however, you can watch some of your favorites who you cheered for after finding their dream wedding gown find their new home on Say Yes to the Nest.