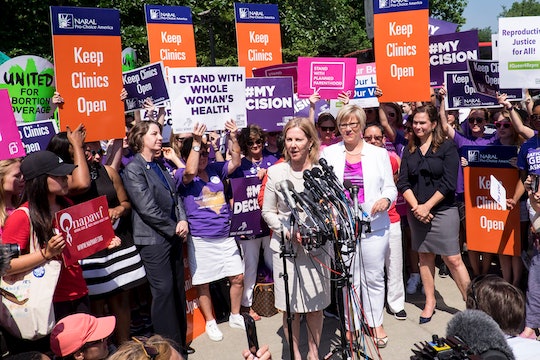 What Is SB 8? Texas’ Abortion Law Is Based In Religion

It's a bad time to be a fertile woman in Texas. On Tuesday, Gov. Greg Abbott signed S.B. 8 into law, and it's set to go into effect in September, leaving less than three months to get it overturned in court. So what is S.B. 8? Texas’ new abortion law, purported to be in the interest of protecting babies, is based on several utter falsehoods, and would only serve to intimidate women, doctors, and scientists. Most of the crimes outlawed by the bill are completely fictional, but the dangerous consequence is that it could be misinterpreted to apply to dilation and evacuation, a completely safe and ethical method of abortion.

S.B. 8 criminalizes "partial-birth abortion," which is not a medical term, but an anti-choice propaganda tactic. The law defines the practice as delivering a live fetus halfway out of a mother and then killing it, which obviously is not how any type of abortion works. But the term is often used as a fallacious substitute for dilation and evacuation, a surgical procedure usually performed in the mid- to late-second trimester, once a medical abortion is no longer an option. During a D&E, the cervix is dilated, and the fetus is removed from the uterus by suction.

Critics of D&E have also referred to it as "dismemberment abortion," because in some cases, the fetus is too large to be removed intact. The Dallas Observer quoted state Sen. Charles Perry's claim that "Each year in Texas, more than a thousand lives are ended by dismemberment abortions." In fact, according to the Texas Department of State Health Services, while 928 D&E procedures were performed after 16 weeks in 2015 (accounting for less than 2 percent of the state's total abortions), it's impossible to know how many were not intact D&Es, and it's extremely disingenuous to assume that none were, all while generously inflating that number. Perry did not immediately return Romper's request for comment.

The law also places strict guidelines on the donation of fetal tissue, stipulating that only an "authorized facility" can donate such tissue to "an accredited university for use in research that has been approved by an institutional review board," according to the bill's text. It also bans outright the donation of "fetal tissue, placenta, or an umbilical cord that is obtained from an elective abortion," and bans the purchase or sale of fetal tissue, despite the fact that there's already a federal law against it, and nobody is buying or selling fetal tissue. Raise your hand if you've ever aborted a wanted pregnancy because a grad student bribed you. Anyone? Didn't think so.

All this is ostensibly being done in the name of protecting fetuses from pain. The Observer also quoted Perry as saying: "We know that children in the womb are capable of feeling pain. Prohibiting this practice is long overdue." We do not know anything of the sort. In fact, according to the American Congress of Obstetricians and Gynecologists, a fetus "does not even have the physiological capacity to perceive pain until at least 24 weeks of gestation," and furthermore, "the neural circuitry necessary to distinguish touch from painful touch does not, in fact, develop until late in the third trimester." Texas already prohibits abortion past 20 weeks. Romper has also reached out to Perry regarding his claim.

But the most insidious aspects of the bill may be the fine print; exceptions to the abortion ban can be made if the mother's life is endangered by a physical disorder, illness, injury, or condition, which implicitly means that the state does not consider a woman's mental health to be a real medical consideration. And if a doctor does perform one of these so-called "partial-birth abortions," the father (as well the parents of the mother, if she's a minor) can sue the doctor for "mental anguish and emotional distress," proving that according to Texas law, a man's feelings take precedent over a woman's life.