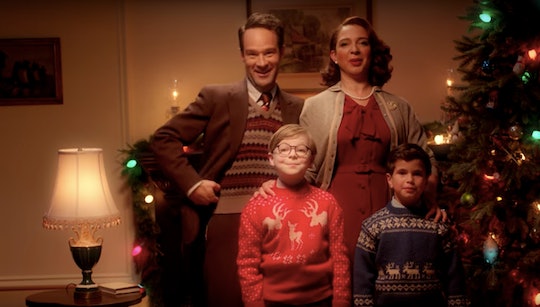 Schwartz's First Name Is A Mystery In 'A Christmas Story'

As the highly-anticapted production of the live, musical adaption of A Christmas Story makes its debut Sunday evening, viewers have (more than) a few questions. So, what exactly is Schwartz's first name in A Christmas Story Live? Even in the classic 1983 film, the hilarious little boy didn't have a first name, and that's kind of all part of the appeal.

Viewers everywhere excitedly tuned in to the live production of the classic Christmas movie about a young boy and his quest for the Christmas present. And with all the antics that take place during the show, it's understandable that viewers would get a bit confused as to who was who, and what their characters were doing. Jane Krakowski is little Ralphie's teacher, Miss Shields. Maya Rudolph has taken on the role of Ralphie's mother, and Matthew Boderick is the older version of Ralphie who narrates the entire show.

But there's one character in particular who remains somewhat of a mystery, although maybe that's the point? One of Ralphie's friends is only called by his last name throughout the show, and no one ever refers to him by his first name. So, it seems as though the 2017 live production of A Christmas Story is following the film's tradition in one way, because Schwartz has never had a first name.

Seriously. If you don't believe my highly-trained journalistic research skills, go look for yourself. Even on the IMDb page for the 1983 film, the character of Schwartz, who was originally played by R.D. Robb, is only listed as "Schwartz," with no first name given. And his mom isn't even credited. In the original movie, it's clear that Schwartz isn't that major of a character, except to serve as Ralphie's scapegoat when he accidentally drops an F-bomb.

In this latest rendition, however, Schwartz's character has a bit of a bigger role.

In addition to getting an insiders look at the Schwartz household, the live musical also adds another plot point when Ralphie decides to do the right thing, and go tell Mrs. Schwartz the truth. In case you forgot, Ralphie had previously claimed that he learned the F-word from his friend Schwartz, which lead to his mother calling Schwartz's mother, and the inevitable punishment in both households (in the form of soap in the mouth, because remember, this movie was set in the 1950s and it was a different time, y'all).

But in the 2017 version, Ralphie decides to go over to Schwartz's house to tell his mom the truth and apolagize. But, since the role of Mrs. Schwartz was played by the legendary Ana Gasteyer (Mean Girls, Saturday Night Live, Difficult People), it only makes sense that the show runners would decide to turn Ralphie's visit to the Schwartz house into a musical number. Yeah, Mrs. Schwartz belts out a pretty sstunning musical number to the tune of a song called "Market for a Miracle."

Speaking to Entertainment Weekly, Gasteyer explained that the song was basically written just for her. "Basically the telecast required one more number because of the way the commercials were paced, so they looked at the piece overall, and they decided there would be a really great moment for a Hanukkah number," she said.