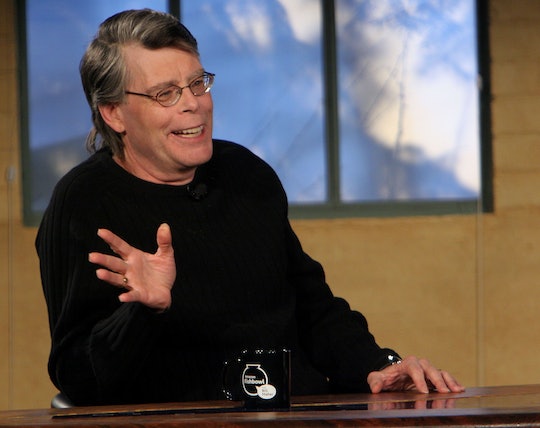 Whether it was through a novel, film, or just an offhand reference, you’ve probably come across something created by the legendary author Stephen King. When you think of King you probably imagine the horror of It or Carrie, but one of his most iconic works is The Shining, and references to it have become embedded in modern pop culture. But exactly what is “shining” in the Stephen King world, and why are fans of Hulu’s Castle Rock bringing it up now?

The “shining” or the “shine” is an ability that some of King’s characters have throughout his novels, most notably Jack and Danny Torrance in The Shining. The official synopsis for the novel from King’s website reads “Evil forces residing in the Overlook — which has a long and violent history — covet young Danny for his precognitive powers and exploit Jack’s weaknesses to try to claim the boy.” This explains the “shine” to be a psychic ability that allows Jack and his son Danny to experience the feelings and thoughts of others, including ghosts.

In Doctor Sleep, the sequel to The Shining, a now grown-up Danny works at a nursing home where “his remnant 'shining' power provides the crucial final comfort to the dying,” King’s book synopsis describes. “Dan meets the evanescent Abra Stone, and it is her spectacular gift, the brightest shining ever seen, that reignites Dan’s own demons and summons him to a battle for Abra’s soul and survival."

So how did this psychic power become known as the “shine?" HughHoneyRealEstate shared their insight on Reddit, writing, “Many of Stephen Kings characters have a variety of psychic powers.” The Redditor continued, “Actually almost every one of his books features a character or characters that have some superhuman mind power. Dick Halloran calls Danny Torrance's power 'Shining' because that's what his grandmother called his abilities.”

The “shine” has manifested in different ways for different characters in King's work. As Reddit user Crzy4Schwinn described it: "'Shine' is a sensitivity to the supernatural or macabre. For example in Duma Key, the protagonist, Edgar Freemantle, has a catastrophic injury which makes him more sensitive to information of a precognitive nature (shine).” Redditor InvoluntaryEyeroll added, “people with the shine can communicate with each other without talking out loud. It's sort of a sixth sense. They can know about people and sense unusual things.”

While The Shining and Doctor Sleep are known for their famous characters with “the shine,” in fact many of King’s characters have similar psychic traits. “I believe there are many characters that possess the ability or 'shine,' specifically in The Dark Tower,” wrote Reddit user IW_Redds. “Book VII has quite a few characters with the 'shine' in it.” A Stephen King Wikia notes that in King’s novel, The Stand, Mother Abigail receives prophecies from God and describes the power as "the shining lamp of God,” and sometimes just calling it "the shine."

So all throughout King’s novels, the “shine” is a sort of psychic ability, in which a person has a supernatural sense of their surroundings or other people. Many fans are theorizing that Molly Strand in Castle Rock, has the “shine,” which is why she is able to feel and hear other people’s emotions. In the third episode of the series, Molly describes her ability saying “I feel things that other people are feeling, and some people are louder than others.”

Since the show references King’s characters, settings, and events, fans are convinced that she has the “shine” too. “She's an empath, obviously, but does she Shine, or is she maybe the child of a Lot experiment?” theorized Reddit user Rebdomin99. “More likely the former rather than the latter, but it did pop in my mind. I wonder if she'll be able to hone her abilities by the seasons end, like Abra or Danny's progression, although to be fair their's were over much longer periods of time.”

The “shining” is a pretty neat concept, but in King’s world, it comes with some pretty harsh ramifications. It will be interesting to see if it is mentioned by name on Castle Rock, and how (if Molly has it) it will play out in the rest of the season.