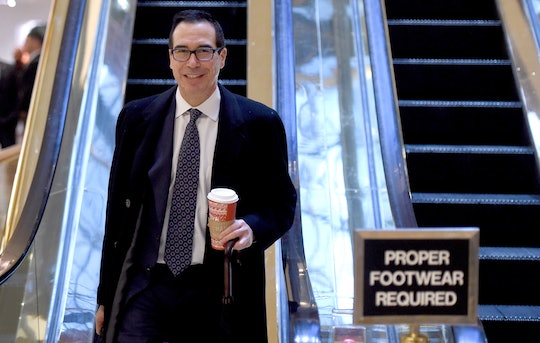 What Is Steve Mnuchin's Net Worth? He Isn't Helping Trump "Drain The Swamp"

For a guy who campaigned against a corrupt system of elites, President-elect Donald Trump sure does seem to be stocking his cabinet chock-full of plutocrats. He's picked banker and investor Steven Mnuchin to lead the Treasury department, and let's just say he's not exactly your typical red-hat-wearing, white working class Trump voter. What is Steve Mnuchin's net worth? It's in the tens of millions. But it's not Mnuchin's wealth itself that puts him at odds with Trump's campaign platform — it's how he made his fortune that is worrying many working Americans.

The pick hardly helps it look like Trump is as committed to "Drain the Swamp" as he was before the election. Romper reached out to both Trump and Mnuchin for comment, but we have not yet received a response.

When Trump raged against "elites" at his campaign rallies, he was talking about the likes of Mnuchin. Yale educated, he spent 17 years as a Goldman Sachs banker, according to the Wall Street Journal. Mnuchin's father was also a legendary banker at Goldman Sachs who worked there for more than 30 years, according to the International Business Times.

Now, as president-elect, Trump will have Mnuchin running the economy. But, remember, Steve Bannon, now Trump's senior adviser, also worked at Goldman Sachs, and, according to the International Business, Times still maintains close ties to the firm.

Here's what Trump's November campaign ad said, which is striking considering what we know about Trump's first major appointments as president-elect. In his closing argument ad just before the election, Trump blamed America's problems on:

...a global power structure that is responsible for the economic decisions that have robbed our working class, stripped our country of its wealth and put that money into the pockets of a handful of large corporations and political entities.

Here's the ad, which is worth re-visiting in light of Mnuchin's appointment along with other power-player billionaires and insiders. But that was then, and this is now.

Mnushin also made money investing in Hollywood, producing movies like Sully, Suicide Squad, American Sniper, and Avatar, according to IMDb. His ties to Hollywood and the top one percent would seem to make him exactly the kind of big business guru many Trump supporters voted against.

"The vote for Trump was partially anti-media and anti-Hollywood,” Stephen Winzenburg, a communications professor at Grand View University in Iowa and author of TV’s Greatest Talk Shows, told The Hollywood Reporter.

If Trump voters were, in fact, voting against Hollywood, how will they feel about a bona fide Hollywood elite running Trump's American economy?

Mnuchin's most troubling resume item was the billions he and a group of fellow billionaire investors made off the housing crisis. He and a number of other investors bought California bank IndyMac, according to NPR. They renamed the bank OneWest Bank and turned it into what Kevin Stein, a housing advocate in California, called "a foreclosure machine," NPR reported, foreclosing on more than 36,000 homes. At the same time, OneWest cut a deal with the federally funded FDIC, which wound up paying the billionaires, including Mnuchin, more than $1 billion tax payer dollars for the privilege of foreclosing on these homes, NPR said.

Eighty-six-year-old Rex Schaffer and his wife Rose lost their home of 50 years to OneWest, according to NPR, and voted for Trump. But they told NPR they hoped Trump wouldn't pick, Mnuchin, the man they hold responsible, to run the economy. "If he can't run his own little bank how can he handle a large thing for the United States?" Rose said, according to NPR.

Mnuchin and his partners who bought IndyMac, which incidentally included left-wing boogeyman Geroge Soros, made about $5 billion on that venture, Vanity Fair reported.

According to Fox Business, Mnuchin is worth about $40 million, which makes him relatively poor compared to Trump's other Cabinet picks, like Betsy DeVos, whom Trump has nominated to be Secretary of Education and whose family's fortune, which her father reportedly amassed from founding Amway, is estimated to be $5.1 billion, according to Vanity Fair. Wilbur Ross, who has been nominated by Trump to be Commerce Secretary, is another banker with a net worth of $2.9 billion, according to Forbes.

Seems safe to say Trump's populist rhetoric that attracted working class voters wasn't what he was really going for when he said "drain the swamp." Now, it appears elites are being given the highest jobs in American government, and that's scary to most Americans