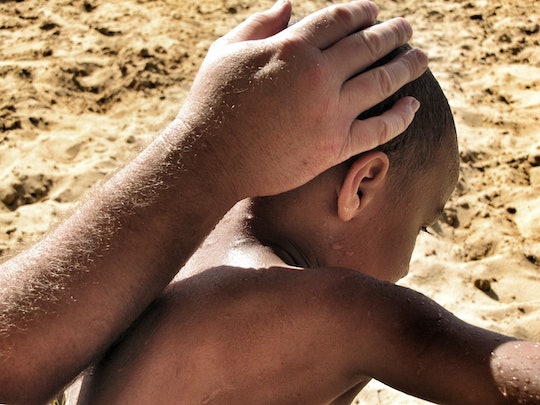 What Is Submarine Parenting? Helicopter & Free-Range Parents Could Have A Third Option

Debates over parenting styles tend to run in extremes. Whether it takes place in a parenting group, online, or between friends, discussions over how to cobble together a solution that meets an individual family’s needs for food, sleep, or play can quickly dissolve into ugly arguments that do little to help moms and dads feel supported — and serve only to dig the battle lines just a bit deeper. But in at least one parenting debate — whether “helicopter parenting” or “free-range parenting” actually helps kids to become secure, independent adults — there seems to be a third option that could be a winner for both sides. What is “submarine parenting?” According to some, it’s a realistic middle ground that some of us might find very familiar.

Parents stay out of sight — under the surface, if you will — letting kids manage situations as they come up. [...] Far from disengaged parenting, submarine parenting means keeping a hidden eye on your children’s progress.

According to Northeastern University behavioral science professor Dr. Kristin Lee Costa, who was quoted in the Globe article, what submarine parenting looks like in practice is allowing kids to confront every day challenges without swooping in to help — in other words, keeping the parents’ own anxieties out of the child’s way:

Help them realize they can overcome another kid being mean to them. If they are anxious and don’t want to go to school, have them sit with their anxiety. When they are able to recompose later, celebrate that they were able to get themselves back on track.

Marie Schwartz, founder of college preparation service Teen Life, said in an interview with Psychology Today that “raising kids is like building a boat and launching it.” She said that the critical point was to let the kid know the parent is there for support, but to stay out of the way until the kid — or boat, to continue the metaphor — actually sends up a call for help.

And, in fact, rather than waiting for kids to find themselves in unfamiliar territory, Schwartz and Costa actually advocated for placing children in situations outside their comfort zones: allowing them to attend sleepaway camps, spend time in other households, and even travel without the ever-present gaze of their own mom or dad.

If any of that sounds familiar, Conroy wrote in her Globe article, it’s because that’s the style many of our own parents took. And it’s probably the style many parents would prefer, she argued, if the demands of everyday life didn’t get in the way:

While my preschooler is capable of putting on her shoes, I’ll often do it for her because we’re short on time. [...] We hover around children during play dates, follow them around the playground so they don’t get hurt, and carry their backpacks as we escort them into school. We select their activities, and a few of us intervene on their behalf with teachers or coaches.

With tragic cases of school bullying, abuse by teachers and childcare workers, and even horrific incidences of gun violence fresh in a parent’s mind, it’s no wonder that many parents feel the need to protect their children. But, as Conroy was willing to admit, making hovering the default basic parenting strategy comes at a steep price. “All of this handholding sends the message that our kids can’t do this without us,” she wrote.

And if kids never develop the self-confidence to solve problems on their own, surviving on college campuses (and beyond) becomes all but impossible, Schwartz told Psychology Today.

Most parents just want to raise their kids to become healthy, productive adults, amirite? But modern parenting is rife with debates that seem to pit parents against each other in impossible either-or scenarios. The good news is that when it comes to how much (or how little) help to give a child, there really might be a middle ground. Rather than running to an extreme “hands-on” or “hands-off” approach, submarine parenting allows kids to test themselves and still know that parents are there when help is really needed. And any solution that builds confident kids (without causing an all-out war at the next parenting group) is probably one worth paying attention to.

More Like This
Ginger Zee Had A Perfect Response After A Troll Asked Her "Who's Raising Your Kids?"
It's A Beautiful Day In Jenny Slate’s Neighborhood
These Boys Saved Their Dad From Drowning With CPR They Learned From The Sandlot
A 10-Year-Old Child Was Denied An Abortion In Ohio