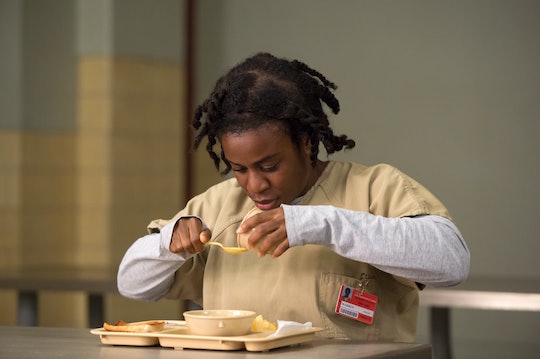 What Is Suzanne Crazy Eyes' Backstory On 'Orange Is The New Black'? We Now Know More

The backstories on Orange Is the New Black are always the most fascinating moments over the course of the seasons. In the past three seasons we have learned something about almost every single character; one major character who still remained a semi-mystery is Suzanne "Crazy Eyes." For years, we've been waiting to learn just how Suzanne became an inmate at Litchfield Penitentiary, and, more so, what type of person she was before prison. On Season 4, Episode 11 of Orange Is the New Black, Suzanne's backstory was revealed. And, as it turns out, her history is a lot darker than I think anyone could've expected, and a lot makes sense now that we know where she comes from.

Although we see what Suzanne's actions lead to, it's actually really nice to see exactly what type of person she was before entering Litchfield. As you would imagine, she was a loving human who just wanted the best but often acted with misguided reactions. Unfortunately, in this situation, those reactions lead to a young boy's potential death, which could be the reason that Suzanne is now in prison and serving a sentence.

In the flashback, we see Suzanne working at a store where she is a greeter at the front door welcoming guests in her happy-go-lucky way. One family that she welcomes has three sons, who she seems to be familiar with. Suzanne's young behavior seems to connect with one of the sons, Dylan, who she later sees at the park one weekend when her sister and her sister's boyfriend leave for a getaway.

After running into Dylan at the park, Suzanne asks him to come play video games at her home, which is obviously crossing a line. Without the consent of an adult, Dylan and Suzanne played games at her apartment until Dylan said he needed to call his dad. But, when Suzanne started to react negatively towards that, insisting that Dylan doesn't leave, Dylan called 911, which freaked Suzanne out even more.

The series of events that followed were based on action/reaction. Dylan — a young boy — clearly felt scared, thus calling 911. He then started running away from Suzanne, trying to unlock the door, then running to the fire escape. While we didn't see exactly what happened, little was left to the imagination and it appears that Dylan fell over the fire escape — to his possible death — which might have landed Suzanne in jail.